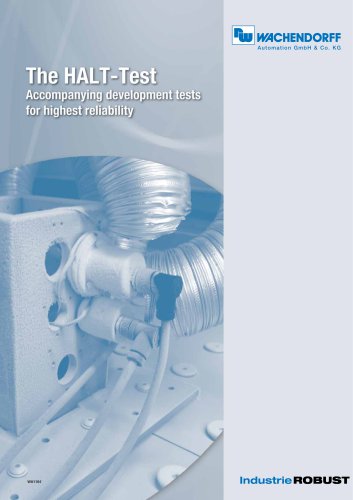 HALT Test for Wachendorff encoders Wachendorff has operated its own HALT testing chamber at its test bay for environmental simulation for several years. The HALT tests (Highly Accelerated Life Test) are an important part of the testing that accompanies development. The following article uses specific examples to describe the testing process for tests that accompany development. As there are no standardised specifications for the HALT test, Wachendorff has modelled its testing process after the „Qualmark HALT Testing Guidelines“ [1]. Classifying the HALT test The HALT test is run during the...

According to the Arrhenius equation, the rule of thumb (for electronics): A temperature increase of 10 °C doubles the failure rate. For that reason, a markedly quicker aging of the test piece is provoked by applying extreme temperatures. HALT process The Wachendorff HALT test process follows the same principle as the HALT procedure. The HALT procedure is broken down into four sections: pre-HALT, HALT testing, post-HALT and verification HALT. Pre-HALT is the preparations needed for the test (such as defining error criteria, creating function tests). The actual tests are run during HALT...

During all tests, the stress level is gradually increased and the test continued until a functional disruption/destruction occurs with the test piece, or the technology‘s limits are reached (e.g. plastic‘s melting point). In addition to test piece functionality, visual and other parameters are monitored closely to identify flaws and record them precisely. The function monitoring at Wachendorff takes place for the absolute rotary encoders via the CANopen interface, for example. At Wachendorff, function tests and statuses are defined on the appropriate encoder. Furthermore, the test piece‘s...

MflCHENDORFF Automation GmbH & Co. KG Encoder The vibration operating limit was determined to be 45 gRMS. The vibration destruct limit could not be determined as the AST chamber‘s limit of 50 gRMS was also reached. The HALT test, a key element in Wachendorff‘s testing strategy, therefore confirms the WDGA absolute rotary encoder‘s robustness and provides Wachendorff and the customer with the knowledge that the product is extremely reliable even under harsh environmental conditions. Literature [1] Qualmark Corporation: Qualmark HALT testing guidelines. Test specification, September 2011...