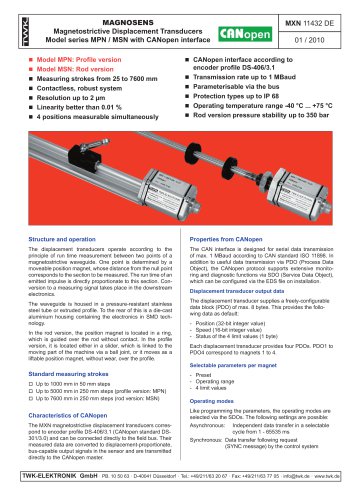 MAGNOSENS Magnetostrictive Displacement Transducers Model series MPN / MSN with CANopen interface CANopen MXN 11432 DE 01 /2010 ■ Model MPN: Profile version ■ Model MSN: Rod version ■ Measuring strokes from 25 to 7600 mm ■ Contactless, robust system ■ Resolution up to 2 pm ■ Linearity better than 0.01 % ■ 4 positions measurable simultaneously ■ CANopen interface according to encoder profile DS-406/3.1 ■ Transmission rate up to 1 MBaud ■ Parameterisable via the bus ■ Protection types up to IP 68 ■ Operating temperature range -40 °C ... +75 °C ■ Rod version pressure stability up to 350 bar Structure and operation The displacement transducers operate according to the principle of run time measurement between two points of a magnetostrictive waveguide. One point is determined by a moveable position magnet, whose distance from the null point corresponds to the section to be measured. The run time of an emitted impulse is directly proportionate to this section. Conversion to a measuring signal takes place in the downstream electronics. The waveguide is housed in a pressure-resistant stainless steel tube or extruded profile. To the rear of this is a die-cast aluminium housing containing the electronics in SMD technology. In the rod version, the position magnet is located in a ring, which is guided over the rod without contact. In the profile version, it is located either in a slider, which is linked to the moving part of the machine via a ball joint, or it moves as a liftable position magnet, without wear, over the profile. Standard measuring strokes □ Up to 1000 mm in 50 mm steps □ Up to 5000 mm in 250 mm steps (profile version: MPN) □ Up to 7600 mm in 250 mm steps (rod version: MSN) Characteristics of CANopen The MXN magnetostrictive displacement transducers correspond to encoder profile DS-406/3.1 (CANopen standard DS-301/3.0) and can be connected directly to the field bus. Their measured data are converted to displacement-proportionate, bus-capable output signals in the sensor and are transmitted directly to the CANopen master. Properties from CANopen The CAN interface is designed for serial data transmission of max. 1 MBaud according to CAN standard ISO 11898. In addition to useful data transmission via PDO (Process Data Object), the CANopen protocol supports extensive monitoring and diagnostic functions via SDO (Service Data Object), which can be configured via the EDS file on installation. Displacement transducer output data The displacement transducer supplies a freely-configurable data block (PDO) of max. 8 bytes. This provides the following data as default: - Position (32-bit integer value) - Speed (16-bit integer value) - Status of the 4 limit values (1 byte) Each displacement transducer provides four PDOs. PDO1 to PDO4 correspond to magnets 1 to 4. Selectable parameters per magnet - Preset - Operating range - 4 limit values Operating modes Like programming the parameters, the operating modes are selected via the SDOs. The following settings are possible: Asynchronous: Independent data transfer in a selectable cycle from 1 - 65535 ms Synchronous: Data transfer following request (SYNC message) by the control system

Node address and baud rate setting Each Magnosens with CANopen interface has an LMT address, via which clear assignment in the CAN network is guaranteed. This is comprised of the TWK manufacturer ID, the product ID and the serial number. The node address and baud rate are set via the LMT service. The default settings are: - Baud rate: 125 kBaud - Node address: 127 EDS file The EDS file - for integrating the sensor into CANopen project planning software - and the CANopen manual in PDF format are contained on the enclosed diskette. Diagnosis The LEDs (green/red) in the sensor head are used...