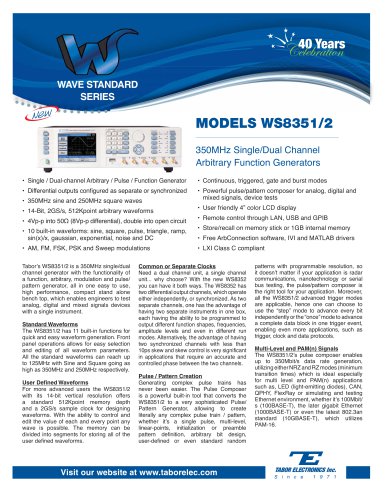 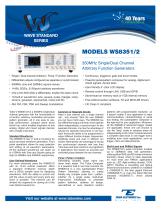 MODELS WS8351/2 350MHz Single/Dual Channel Arbitrary Function Generators • Single / Dual-channel Arbitrary / Pulse / Function Generator • Continuous, triggered, gate and burst modes • Differential outputs congured as separate or synchronized • 350MHz sine and 250MHz square waves • Powerful pulse/pattern composer for analog, digital and mixed signals, device tests • User friendly 4” color LCD display • 4Vp-p into 50Ω (8Vp-p differential), double into open circuit • Remote control through LAN, USB and GPIB • 10 built-in waveforms: sine, square, pulse, triangle, ramp, sin(x)/x, gaussian, exponential, noise and DC • Store/recall on memory stick or 1GB internal memory Tabor’s WS8351/2 is a 350MHz single/dual channel generator with the functionality of a function, arbitrary, modulation and pulse/ pattern generator, all in one easy to use, high performance, compact stand alone bench top, which enables engineers to test analog, digital and mixed signals devices with a single instrument. Standard Waveforms The WS8351/2 has 11 built-in functions for quick and easy waveform generation. Front panel operations allows for easy selection and editing of all waveform parameters. All the standard waveforms can reach up to 125MHz with Sine and Square going as high as 350MHz and 250MHz respectively. User Dened Waveforms For more advanced users the WS8351/2 with its 14-bit vertical resolution offers a standard 512Kpoint memory depth and a 2GS/s sample clock for designing waveforms. With the ability to control and edit the value of each and every point any wave is possible. The memory can be divided into segments for storing all of the user dened waveforms. • Free ArbConnection software, IVI and MATLAB drivers Common or Separate Clocks Need a dual channel unit, a single channel unit... why choose? With the new WS8352 you can have it both ways. The WS8352 has two differential output channels, which operate either independently, or synchronized. As two separate channels, one has the advantage of having two separate instruments in one box, each having the ability to be programmed to output different function shapes, frequencies, amplitude levels and even in different run modes. Alternatively, the advantage of having two synchronized channels with less than 10ps skew and skew control is very signicant in applications that require an accurate and controlled phase between the two channels. Pulse / Pattern Creation Generating complex pulse trains has never been easier. The Pulse Composer is a powerful built-in tool that converts the WS8351/2 to a very sophisticated Pulse/ Pattern Generator, allowing to create literally any complex pulse train / pattern, whether it’s a single pulse, multi-level, linear-points, initialization or preamble pattern denition, arbitrary bit design, user-dened or even standard random patterns with programmable resolution, so it doesn’t matter if your application is radar communications, nanotechnology or serial bus testing, the pulse/pattern composer is the right tool for your application. Moreover, all the WS8351/2 advanced trigger modes are applicable, hence one can choose to use the “step” mode to advance every bit independently or the “once” mode to advance a complete data block in one trigger event, enabling even more applications, such as trigger, clock and data protocols. Multi-Level and PAM(n) Signals The WS8351/2’s pulse composer enables up to 350Mbit/s data rate generation, utilizing either NRZ and RZ modes (minimum transition times) which is ideal especially for multi level and PAM(n) applications such as, LED (light-emitting diodes), CAN, QPHY, FlexRay or simulating and testing Ethernet environment, whether it’s 100Mbit/ s (100BASE-T), the later gigabit Ethernet (1000BASE-T) or even the latest 802.3an standard (10GBASE-T), which utilizes PAM-16. 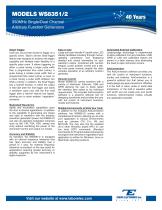 MODELS WS8351/2 350MHz Single/Dual Channel Arbitrary Function Generators Smart Trigger Until now, you've been forced to trigger on a specic event. Tabor's all-new SmarTrigger feature was designed to enhance the trigger capability and facilitate wider exibility of a specic pulse event. It allows triggering on either a pulse having a larger pulse width than a programmed time value (time), or even on a pulse having a pulse width between two limits (<>time). In addition, the SmarTrigger has a hold-off function, in which the output is held idle after the rst trigger and starts a waveform cycle... 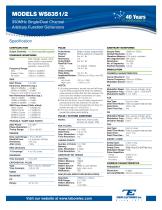 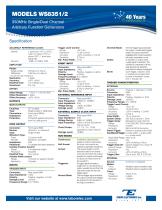 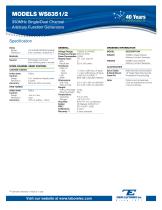