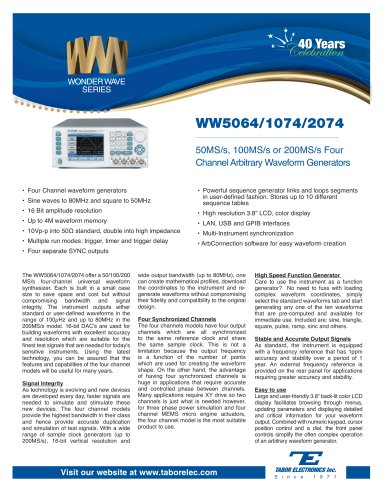 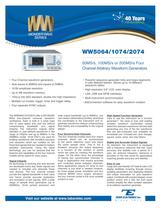 WW5064/1074/2074 50MS/s, 100MS/s or 200MS/s Four Channel Arbitrary Waveform Generators • Four Channel waveform generators • Sine waves to 80MHz and square to 50MHz • Powerful sequence generator links and loops segments in user-dened fashion. Stores up to 10 different sequence tables • 16 Bit amplitude resolution • High resolution 3.8” LCD, color display • Up to 4M waveform memory • LAN, USB and GPIB interfaces • 10Vp-p into 50Ω standard, double into high impedance • Multi-Instrument synchronization • Multiple run modes: trigger, timer and trigger delay • ArbConnection software for easy waveform creation • Four separate SYNC outputs The WW5064/1074/2074 offer a 50/100/200 MS/s four-channel universal waveform synthesizer. Each is built in a small case size to save space and cost but without compromising bandwidth and signal integrity. The instrument outputs either standard or user-dened waveforms in the range of 100μHz and up to 80MHz in the 200MS/s model. 16-bit DAC's are used for building waveforms with excellent accuracy and resolution which are suitable for the nest test signals that are needed for today's sensitive instruments. Using the latest technology, you can be assured that the features and capabilities of the four channel models will be useful for many years. Signal Integrity As technology is evolving and new devices are developed every day, faster signals are needed to simulate and stimulate these new devices. The four channel models provide the highest bandwidth in their class and hence provide accurate duplication and simulation of test signals. With a wide range of sample clock generators (up to 200MS/s), 16-bit vertical resolution and wide output bandwidth (up to 80MHz), one can create mathematical proles, download the coordinates to the instrument and regenerate waveforms without compromising their delity and compatibility to the original design. Four Synchronized Channels The four channels models have four output channels which are all synchronized to the same reference clock and share the same sample clock. This is not a limitation because the output frequency is a function of the number of points which are used for creating the waveform shape. On the other hand, the advantage of having four synchronized channels is huge in applications that require accurate and controlled phase between channels. Many applications require XY drive so two channels is just what is needed however, for three phase power simulation and four channel MEMS micro engine actuators, the four channel model is the most suitable product to use. High Speed Function Generator Care to use the instrument as a function generator? No need to fuss with loading complex waveform coordinates, simply select the standard waveforms tab and start generating any one of the ten waveforms that are pre-computed and available for immediate use. Included are: sine, triangle, square, pulse, ramp, sinc and others. Stable and Accurate Output Signals As standard, the instrument is equipped with a frequency reference that has 1ppm accuracy and stability over a period of 1 year. An external frequency reference is provided on the rear panel for applications requiring greater accuracy and stability. Easy to use Large and user-friendly 3.8” back-lit color LCD display facilitates browsing through menus, updating parameters and displaying detailed and critical information for your waveform output. Combined with numeric keypad, cursor position control and a dial, the front panel controls simplify the often complex operation of an arbitrary waveform generator. 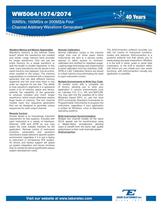 WW5064/1074/2074 50MS/s, 100MS/s or 200MS/s Four Channel Arbitrary Waveform Generators Waveform Memory and Memory Segmentation Waveform memory is the internal "black board" where the waveforms are created and reside. Large memory bank provides for longer waveforms. One can use the entire memory for a single waveform or split the length to smaller segments. In this case, many waveforms can be stored in the same memory and replayed, one-at-a-time, when recalled to the output. The memory segmentation is combined with a sequence generator that can take different memory segments and link (and... 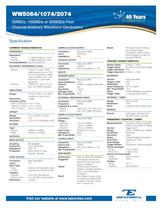 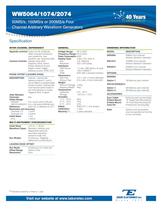