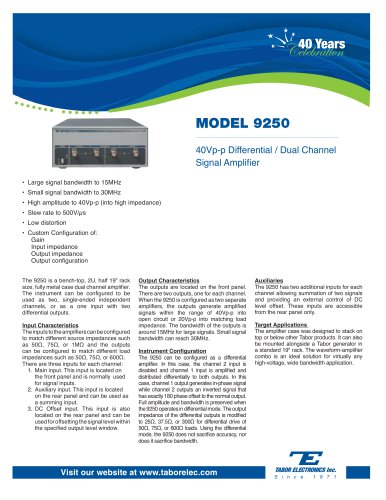 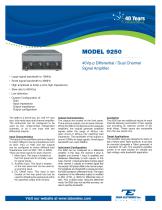 MODEL 9250 40Vp-p Differential / Dual Channel Signal Amplier • Large signal bandwidth to 15MHz • Small signal bandwidth to 30MHz • High amplitude to 40Vp-p (into high impedance) • Slew rate to 500V/μs • Low distortion • Custom Conguration of: Gain Input impedance Output impedance Output conguration The 9250 is a bench-top, 2U, half 19” rack size, fully metal case dual channel amplier. The instrument can be congured to be used as two, single-ended independent channels, or as a one input with two differential outputs. Input Characteristics The inputs to the ampliers can be congured to match different source impedances such as 50Ω, 75Ω, or 1MΩ and the outputs can be congured to match different load impedances such as 50Ω, 75Ω, or 600Ω. There are three inputs for each channel: 1. Main input. This input is located on the front panel and is normally used for signal inputs. 2. Auxiliary input. This input is located on the rear panel and can be used as a summing input. 3. DC Offset input. This input is also located on the rear panel and can be used for offsetting the signal level within the specied output level window. Output Characteristics The outputs are located on the front panel. There are two outputs, one for each channel. When the 9250 is congured as two separate ampliers, the outputs generate amplied signals within the range of 40Vp-p into open circuit or 20Vp-p into matching load impedance. The bandwidth of the outputs is around 15MHz for large signals. Small signal bandwidth can reach 30MHz. Instrument Conguration The 9250 can be congured as a differential amplier. In this case, the channel 2 input is disabled and channel 1 input is amplied and distributed differentially to both outputs. In this case, channel 1 output generates in-phase signal while channel 2 outputs an inverted signal that has exactly 180 phase offset to the normal output. Full amplitude and bandwidth is preserved when the 9250 operates in differential mode. The output impedance of the differential outputs is modied to 25Ω, 37.5Ω, or 300Ω for differential drive of 50Ω, 75Ω, or 600Ω loads. Using the differential mode, the 9250 does not sacrice accuracy, nor does it sacrice bandwidth. Auxiliaries The 9250 has two additional inputs for each channel allowing summation of two signals and providing an external control of DC level offset. These inputs are accessible from the rear panel only. Target Applications The amplier case was designed to stack on top or below other Tabor products. It can also be mounted alongside a Tabor generator in a standard 19" rack. The waveform-amplier combo is an ideal solution for virtually any high-voltage, wide bandwidth application. 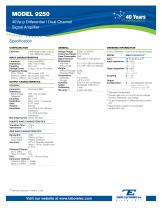