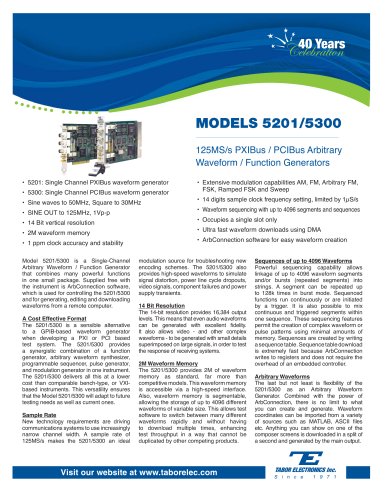 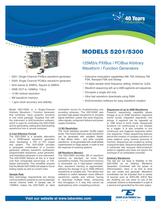 MODELS 5201/5300 125MS/s PXIBus / PCIBus Arbitrary Waveform / Function Generators • 5201: Single Channel PXIBus waveform generator • 5300: Single Channel PCIBus waveform generator • Extensive modulation capabilities AM, FM, Arbitrary FM, FSK, Ramped FSK and Sweep • Sine waves to 50MHz, Square to 30MHz • 14 digits sample clock frequency setting, limited by 1μS/s • SINE OUT to 125MHz, 1Vp-p • Waveform sequencing with up to 4096 segments and sequences • 14 Bit vertical resolution • Occupies a single slot only • 2M waveform memory • Ultra fast waveform downloads using DMA • 1 ppm clock accuracy and stability • ArbConnection software for easy waveform creation Model 5201/5300 is a Single-Channel Arbitrary Waveform / Function Generator that combines many powerful functions in one small package. Supplied free with the instrument is ArbConnection software, which is used for controlling the 5201/5300 and for generating, editing and downloading waveforms from a remote computer. A Cost Effective Format The 5201/5300 is a sensible alternative to a GPIB-based waveform generator when developing a PXI or PCI based test system. The 5201/5300 provides a synergistic combination of a function generator, arbitrary waveform synthesizer, programmable sequencer, pulse generator, and modulation generator in one instrument. The 5201/5300 delivers all this at a lower cost than comparable bench-type, or VXIbased instruments. This versatility ensures that the Model 5201/5300 will adapt to future testing needs as well as current ones. Sample Rate New technology requirements are driving communications systems to use increasingly narrow channel width. A sample rate of 125MS/s makes the 5201/5300 an ideal modulation source for troubleshooting new encoding schemes. The 5201/5300 also provides high-speed waveforms to simulate signal distortion, power line cycle dropouts, video signals, component failures and power supply transients. 14 Bit Resolution The 14-bit resolution provides 16,384 output levels. This means that even audio waveforms can be generated with excellent delity. It also allows video - and other complex waveforms - to be generated with small details superimposed on large signals, in order to test the response of receiving systems. 2M Waveform Memory The 5201/5300 provides 2M of waveform memory as standard, far more than competitive models. This waveform memory is accessible via a high-speed interface. Also, waveform memory is segmentable, allowing the storage of up to 4096 different waveforms of variable size. This allows test software to switch between many different waveforms rapidly and without having to download multiple times, enhancing test throughput in a way that cannot be duplicated by other competing products. Sequences of up to 4096 Waveforms Powerful sequencing capability allows linkage of up to 4096 waveform segments and/or bursts (repeated segments) into strings. A segment can be repeated up to 128k times in burst mode. Sequenced functions run continuously or are initiated by a trigger. It is also possible to mix continuous and triggered segments within one sequence. These sequencing features permit the creation of complex waveform or pulse patterns using minimal amounts of memory. Sequences are created by writing a sequence table. Sequence table download is extremely fast because ArbConnection writes to registers and does not require the overhead of an embedded controller. Arbitrary Waveforms The last but not least is exibility of the 5201/5300 as an Arbitrary Waveform Generator. Combined with the power of ArbConnection, there is no limit to what you can create and generate. Waveform coordinates can be imported from a variety of sources such as MATLAB, ASCII les etc. Anything you can show on one of the composer screens is downloaded in a split of a second and generated by the main output. 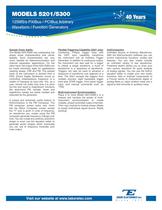 MODELS 5201/5300 125MS/s PXIBus / PCIBus Arbitrary Waveform / Function Generators Sample Clock Agility The Model 5201/5300 has outstanding low phase noise characteristics and carrier stability. Such characteristics are very much needed for telecommunication and channel separation applications. On the other hand, the output of the 5201/5300 can be made extremely agile for applications needing sweep, FSK and FM. The sample clock of the instrument is derived from a DDS (Direct Digital Synthesis) circuit so controlling instantaneous frequency is a matter of changing its input bits. You, as a... 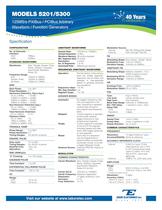