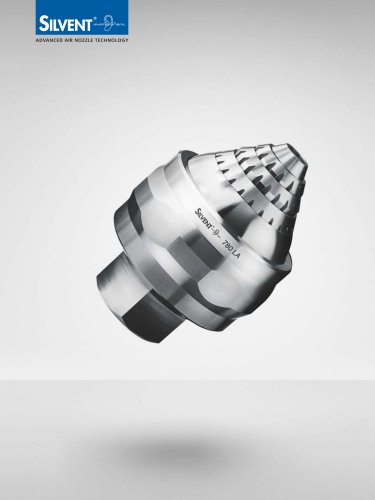 some think competition. we think innovation

“The results showed that an investment in Silvent air guns reduced compressed air consumption by up to 57%.” Excerpt from a study conducted by a leading European car manufacturer

Six industries Six problems – one solution Energy savings in the European automotive industry Several years ago a prominent European carmaker conducted a study of energy saving and noise reducing compressed air guns. They compared the Silvent 500 safety gun with a conventional gun. The company did extensive testing at more than 1300 work stations. The results showed conclusively that an investment in Silvent air guns reduced compressed air consumption by up to 57%. Return on Investment (ROI) was less than one year. Unique expertise helped a well-known packaging company The best known...

Compare the major differences between Silvent air nozzles and blowing with an open pipe in the table below, which is based on an eight-hour work day with blowing 5 days per week, year around. The cost of 1 Nm3 at 500 kPa is calculated to the nearest £0.0131 Through practical application testing we have been able to compile a table that shows which nozzles perform the same job as an open pipe. EXAMPLE Open pipe 0 10 mm (3/8") Number of hours per year: 52 weeks x 5 working days x 8 hours = 2,080 hours Cost per hour: 185 Nm3 x £0.013 = £2.41 Annual operating cost = £5 013 Replaced with SILVENT...

Silvent - the company Noise is a problem In 1978 the manufacturing industry in Sweden had had it. They realized that something needed to be done about the noise situation in Swedish factories. The frequency of hearing impairment resulting from excessive noise levels was skyrocketing. Representatives from internationally known export companies, trade unions and the Ministry of Labor sat down together to make a number of historic decisions that would dramatically improve working conditions throughout Swedish industry. Numerous studies were conducted that indicated that 70-80% of all hearing...

Silvent's highly trained employees have cutting edge expertise in blowing with compressed air. All products are assembled and inspected at our headquarters in Sweden prior to delivery. Silvent is an abbreviation of the two Latin words Silencium Ventum, which means silent wind. Silvent is headquartered in Sweden. Distributors and staff from all over the world come here for training.

Open the catalog to page 14

SOLUTIONS FOR STEEL MILLS We aren't a new company. The fact is that for years we've been the market leader in our segment: compressed air blowing. But it wasn't until a few years ago that we realized our products could improve quality during steel production. After thousands of hours of development, our new products —completely tailored to the steel industry—are now tested at steel mills and patented. New partner in the steel industry Although we have collaborated over the years with steel mills such as US Steel, Baosteel, and Nippon Steel, we are a relatively new partner in the steel...

Open the catalog to page 15

Open the catalog to page 17

FACTS ABOUT COMPRESSED AIR BLOWING A high noise level does not mean good blowing force Nearly everyone understands that a higher noise level doesn’t necessarily indicate a more powerful engine. Yet many people believe that the higher the noise level, the stronger the blowing force. Many industries seem to be convinced that they have implemented efficient compressed air solutions simply because the noise level is high. Do you want to know the actual truth about noise and blowing force? Not many people know just how much compressed air actually costs In your shower you use a nozzle that...

Open the catalog to page 18