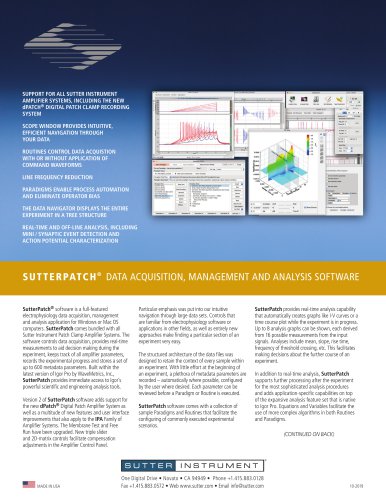 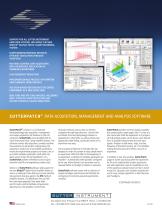 SUPPORT FOR ALL SUTTER INSTRUMENT AMPLIFIER SYSTEMS, INCLUDING THE NEW dPATCH® DIGITAL PATCH CLAMP RECORDING SYSTEM SCOPE WINDOW PROVIDES INTUITIVE, EFFICIENT NAVIGATION THROUGH YOUR DATA ROUTINES CONTROL DATA ACQUISTION WITH OR WITHOUT APPLICATION OF COMMAND WAVEFORMS LINE FREQUENCY REDUCTION PARADIGMS ENABLE PROCESS AUTOMATION AND ELIMINATE OPERATOR BIAS THE DATA NAVIGATOR DISPLAYS THE ENTIRE EXPERIMENT IN A TREE STRUCTURE REAL-TIME AND OFF-LINE ANALYSIS, INCLUDING MINI / SYNAPTIC EVENT DETECTION AND ACTION POTENTIAL CHARACTERIZATION SutterPatch® software is a full-featured electrophysiology data acquisition, management and analysis application for Windows or Mac OS computers. SutterPatch comes bundled with all Sutter Instrument Patch Clamp Amplifier Systems. The software controls data acquisition, provides real-time measurements to aid decision making during the experiment, keeps track of all amplifier parameters, records the experimental progress and stores a set of up to 600 metadata parameters. Built within the latest version of Igor Pro by WaveMetrics, Inc., SutterPatch provides immediate access to Igor's powerful scientific and engineering analysis tools. Version 2 of SutterPatch software adds support for the new dPatch® Digital Patch Amplifier System as well as a multitude of new features and user interface improvements that also apply to the IPA Family of Amplifier Systems. The Membrane Test and Free Run have been upgraded. New triple slider and 2D-matrix controls facilitate compensation adjustments in the Amplifier Control Panel. Particular emphasis was put into our intuitive navigation through large data sets. Controls that are familiar from electrophysiology software or applications in other fields, as well as entirely new approaches make finding a particular section of an experiment very easy. The structured architecture of the data files was designed to retain the context of every sample within an experiment. With little effort at the beginning of an experiment, a plethora of metadata parameters are recorded - automatically where possible, configured by the user where desired. Each parameter can be reviewed before a Paradigm or Routine is executed. SutterPatch software comes with a collection of sample Paradigms and Routines that facilitate the configuring of commonly executed experimental scenarios. SutterPatch provides real-time analysis capability that automatically creates graphs like I-V curves or a time course plot while the experiment is in progress. Up to 8 analysis graphs can be shown, each derived from 16 possible measurements from the input signals. Analyses include mean, slope, rise time, frequency of threshold crossing, etc. This facilitates making decisions about the further course of an experiment. In addition to real-time analysis, SutterPatch supports further processing after the experiment for the most sophisticated analysis procedures and adds application-specific capabilities on top of the expansive analysis feature set that is native to Igor Pro. Equations and Variables facilitate the use of more complex algorithms in both Routines and Paradigms. (CONTINUED ON BACK) One Digital Drive • Novato • CA 94949 • Phone +1.415.883.0128 Fax +1.415.883.0572 • Web www.sutter.com • Email info@sutter.com 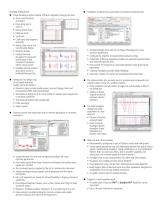