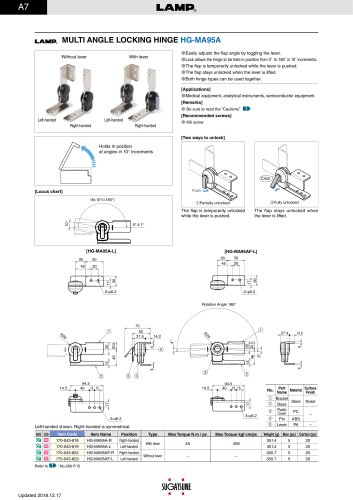 LAMP®LAMP. MULTI ANGLE LOCKING HINGE HG-MA95A • Easily adjusts the flap angle by toggling the lever. •Lock allows the hinge to be held in position from 0° to 180° in 10° increments. •The flap is temporarily unlocked while the lever is pushed. •The flap stays unlocked when the lever is lifted. •Both hinge types can be used together. [Applications] •Medical equipment, analytical instruments, semiconductor equipment. [Remarks] • Be sure to read the “Cautions” K^. [Recommended screws] • M5 screw [Two ways to unlock] The flap is temporarily unlocked The flap stays unlocked when while the lever is pushed.    the lever is lifted. Left-handed shown. Right-handed is symmetrical.