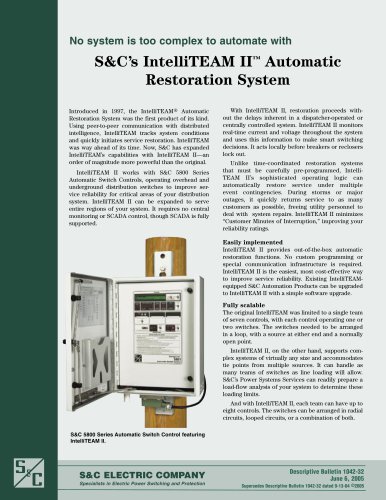 No system is too complex to automate with S&C’s IntelliTEAM II™ Automatic Restoration System Introduced in 1997, the IntelliTEAM® Automatic Restoration System was the first product of its kind. Using peer-to-peer communication with distributed intelligence, IntelliTEAM tracks system conditions and quickly initiates service restoration. IntelliTEAM was way ahead of its time. Now, S&C has expanded IntelliTEAM’s capabilities with IntelliTEAM II—an order of magnitude more powerful than the original. IntelliTEAM II works with S&C 5800 Series Automatic Switch Controls, operating overhead and underground distribution switches to improve service reliability for critical areas of your distribution system. IntelliTEAM II can be expanded to serve entire regions of your system. It requires no central monitoring or SCADA control, though SCADA is fully supported. With IntelliTEAM II, restoration proceeds without the delays inherent in a dispatcher-operated or centrally controlled system. IntelliTEAM II monitors real-time current and voltage throughout the system and uses this information to make smart switching decisions. It acts locally before breakers or reclosers lock out. Unlike time-coordinated restoration systems that must be carefully pre-programmed, IntelliTEAM II’s sophisticated operating logic can automatically restore service under multiple event contingencies. During storms or major outages, it quickly returns service to as many customers as possible, freeing utility personnel to deal with system repairs. IntelliTEAM II minimizes “Customer Minutes of Interruption,” improving your reliability ratings. Easily implemented IntelliTEAM II provides out-of-the-box automatic restoration functions. No custom programming or special communication infrastructure is required. IntelliTEAM II is the easiest, most cost-effective way to improve service reliability. Existing IntelliTEAMequipped S&C Automation Products can be upgraded to IntelliTEAM II with a simple software upgrade. Fully scalable The original IntelliTEAM was limited to a single team of seven controls, with each control operating one or two switches. The switches needed to be arranged in a loop, with a source at either end and a normally open point. IntelliTEAM II, on the other hand, supports complex systems of virtually any size and accommodates tie points from multiple sources. It can handle as many teams of switches as line loading will allow. S&C’s Power Systems Services can readily prepare a load-flow analysis of your system to determine these loading limits. And with IntelliTEAM II, each team can have up to eight controls. The switches can be arranged in radial circuits, looped circuits, or a combination of both. S&C 5800 Series Automatic Switch Control featuring IntelliTEAM II. S&C ELECTRIC COMPANY Specialists in Electric Power Switching and Protection Descriptive Bulletin 1042-32 June 6, 2005 Supersedes Descriptive Bulletin 1042-32 dated 9-13-04 ©2005

Maximize the efficiency of your system Compatible with existing systems Restoration capacity is based on real-time loading and actual feeder capacity, not often-outdated historical loading data. Your circuits can be routinely loaded higher . . . IntelliTEAM II prevents overloading during restoration. The excess capacity of adjacent sources is used to restore service to unfaulted segments, helping defer the need for system upgrades and allowing you to tie circuits that traditional planning criteria wouldn’t permit. IntelliTEAM II-equipped controls utilize DNP 3.0 protocol and peer-to-peer...

If another event takes place after the team has trans- ferred to an alternate source, the team will seek another alternate source to keep its line segment energized. The ability to respond to multiple contingencies makes IntelliTEAM II a much more effective tool than other systems. Each coach maintains excess-capacity statistics on adjacent teams that it can use to dynamically prioritize The example below shows how IntelliTEAM II responds to a faulted segment. All switches in the affected team experience an overcurrent followed by a loss of voltage. All switches in the team open to isolate...