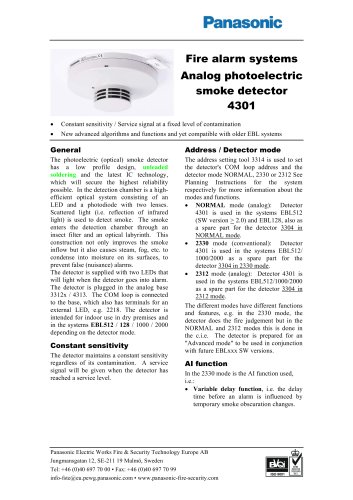 Panasonic Electric Works Fire & Security Technology Europe AB Jungmansgatan 12, SE-211 19 Malmö, Sweden Tel: +46 (0)40 697 70 00 • Fax: +46 (0)40 697 70 99 info-fste@eu.pewg.panasonic.com • www.panasonic-fire-security.com Fire alarm systems Analog photoelectric smoke detector 4301 • Constant sensitivity / Service signal at a fixed level of contamination • New advanced algorithms and functions and yet compatible with older EBL systems General The photoelectric (optical) smoke detector has a low profile design, unleaded soldering and the latest IC technology, which will secure the highest reliability possible. In the detection chamber is a highefficient optical system consisting of an LED and a photodiode with two lenses. Scattered light (i.e. reflection of infrared light) is used to detect smoke. The smoke enters the detection chamber through an insect filter and an optical labyrinth. This construction not only improves the smoke inflow but it also causes steam, fog, etc. to condense into moisture on its surfaces, to prevent false (nuisance) alarms. The detector is supplied with two LEDs that will light when the detector goes into alarm. The detector is plugged in the analog base 3312x / 4313. The COM loop is connected to the base, which also has terminals for an external LED, e.g. 2218. The detector is intended for indoor use in dry premises and in the systems EBL512 / 128 / 1000 / 2000 depending on the detector mode. Constant sensitivity The detector maintains a constant sensitivity regardless of its contamination. A service signal will be given when the detector has reached a service level. Address / Detector mode The address setting tool 3314 is used to set the detector's COM loop address and the detector mode NORMAL, 2330 or 2312 See Planning Instructions for the system respectively for more information about the modes and functions. • NORMAL mode (analog): Detector 4301 is used in the systems EBL512 (SW version > 2.0) and EBL128, also as a spare part for the detector 3304 in NORMAL mode. • 2330 mode (conventional): Detector 4301 is used in the systems EBL512/ 1000/2000 as a spare part for the detector 3304 in 2330 mode. • 2312 mode (analog): Detector 4301 is used in the systems EBL512/1000/2000 as a spare part for the detector 3304 in 2312 mode. The different modes have different functions and features, e.g. in the 2330 mode, the detector does the fire judgement but in the NORMAL and 2312 modes this is done in the c.i.e. The detector is prepared for an "Advanced mode" to be used in conjunction with future EBLxxx SW versions. AI function In the 2330 mode is the AI function used, i.e.: • Variable delay function, i.e. the delay time before an alarm is influenced by temporary smoke obscuration changes.