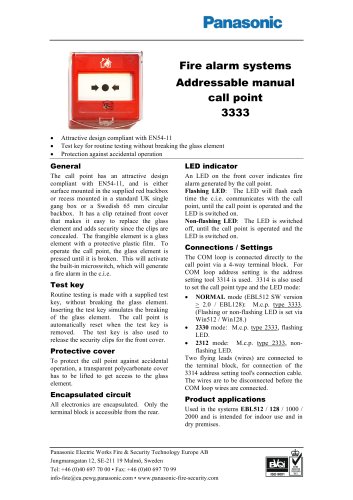 Panasonic Electric Works Fire & Security Technology Europe AB Jungmansgatan 12, SE-211 19 Malmö, Sweden Tel: +46 (0)40 697 70 00 • Fax: +46 (0)40 697 70 99 info-fste@eu.pewg.panasonic.com • www.panasonic-fire-security.com Fire alarm systems Addressable manual call point 3333 • Attractive design compliant with EN54-11 • Test key for routine testing without breaking the glass element • Protection against accidental operation General The call point has an attractive design compliant with EN54-11, and is either surface mounted in the supplied red backbox or recess mounted in a standard UK single gang box or a Swedish 65 mm circular backbox. It has a clip retained front cover that makes it easy to replace the glass element and adds security since the clips are concealed. The frangible element is a glass element with a protective plastic film. To operate the call point, the glass element is pressed until it is broken. This will activate the built-in microswitch, which will generate a fire alarm in the c.i.e. Test key Routine testing is made with a supplied test key, without breaking the glass element. Inserting the test key simulates the breaking of the glass element. The call point is automatically reset when the test key is removed. The test key is also used to release the security clips for the front cover. Protective cover To protect the call point against accidental operation, a transparent polycarbonate cover has to be lifted to get access to the glass element. Encapsulated circuit All electronics are encapsulated. Only the terminal block is accessible from the rear. LED indicator An LED on the front cover indicates fire alarm generated by the call point. Flashing LED: The LED will flash each time the c.i.e. communicates with the call point, until the call point is operated and the LED is switched on. Non-flashing LED: The LED is switched off, until the call point is operated and the LED is switched on. Connections / Settings The COM loop is connected directly to the call point via a 4-way terminal block. For COM loop address setting is the address setting tool 3314 is used. 3314 is also used to set the call point type and the LED mode: • NORMAL mode (EBL512 SW version > 2.0 / EBL128): M.c.p. type 3333. (Flashing or non-flashing LED is set via Win512 / Win128.) • 2330 mode: M.c.p. type 2333, flashing LED. • 2312 mode: M.c.p. type 2333, nonflashing LED. Two flying leads (wires) are connected to the terminal block, for connection of the 3314 address setting tool's connection cable. The wires are to be disconnected before the COM loop wires are connected. Product applications Used in the systems EBL512 / 128 / 1000 / 2000 and is intended for indoor use and in dry premises.