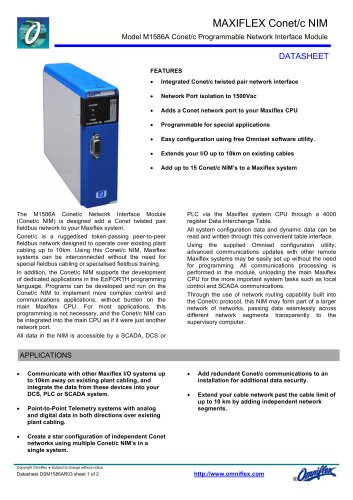 MAXIFLEX Conet/c NIM Model M1586A Conet/c Programmable Network Interface Module DATASHEET FEATURES • Integrated Conet/c twisted pair network interface Network Port isolation to 1500Vac Adds a Conet network port to your Maxiflex CPU Programmable for special applications Easy configuration using free Omniset software utility. Extends your I/O up to 10km on existing cables Add up to 15 Conet/c NIM’s to a Maxiflex system The M1586A Conet/c Network Interface Module (Conet/c NIM) is designed add a Conet twisted pair fieldbus network to your Maxiflex system. Conet/c is a ruggedised token-passing peer-to-peer fieldbus network designed to operate over existing plant cabling up to 10km. Using this Conet/c NIM, Maxiflex systems can be interconnected without the need for special fieldbus cabling or specialised fieldbus training. In addition, the Conet/c NIM supports the development of dedicated applications in the EziFORTH programming language. Programs can be developed and run on the Conet/c NIM to implement more complex control and communications applications, without burden on the main Maxiflex CPU. For most applications, this programming is not necessary, and the Conet/c NIM can be integrated into the main CPU as if it were just another network port. All data in the NIM is accessible by a SCADA, DCS or PLC via the Maxiflex system CPU through a 4000 register Data Interchange Table. All system configuration data and dynamic data can be read and written through this convenient table interface. Using the supplied Omniset configuration utility, advanced communications updates with other remote Maxiflex systems may be easily set up without the need for programming. All communications processing is performed in the module, unloading the main Maxiflex CPU for the more important system tasks such as local control and SCADA communications. Through the use of network routing capability built into the Conet/c protocol, this NIM may form part of a larger network of networks, passing data seamlessly across different network segments transparently to the supervisory computer. Communicate with other Maxiflex I/O systems up to 10km away on existing plant cabling, and integrate the data from these devices into your DCS, PLC or SCADA system. Point-to-Point Telemetry systems with analog and digital data in both directions over existing plant cabling. Add redundant Conet/c communications to an installation for additional data security. Extend your cable network past the cable limit of up to 10 km by adding independent network segments. Create a star configuration of independent Conet networks using multiple Conet/c NIM’s in a single system. Copyright Omniflex ♦ Subject to change without notice

All Omniflex catalogs and technical brochures