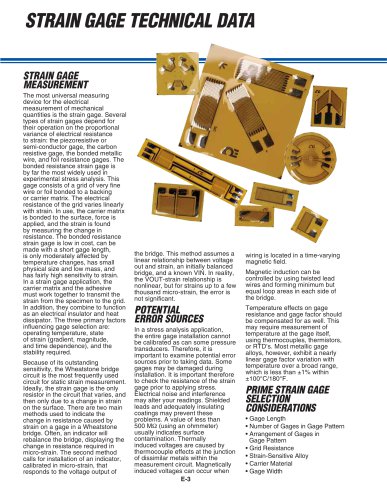 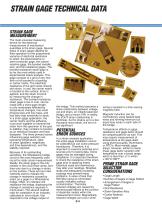 STRAIN GAGE TECHNICAL DATA STRAIN GAGE MEASUREMENT The most universal measuring device for the electrical measurement of mechanical quantities is the strain gage. Several types of strain gages depend for their operation on the proportional variance of electrical resistance to strain: the piezoresistive or semi-conductor gage, the carbon resistive gage, the bonded metallic wire, and foil resistance gages. The bonded resistance strain gage is by far the most widely used in experimental stress analysis. This gage consists of a grid of very fine wire or foil bonded to a backing or carrier matrix. The electrical resistance of the grid varies linearly with strain. In use, the carrier matrix is bonded to the surface, force is applied, and the strain is found by measuring the change in resistance. The bonded resistance strain gage is low in cost, can be made with a short gage length, is only moderately affected by temperature changes, has small physical size and low mass, and has fairly high sensitivity to strain. In a strain gage application, the carrier matrix and the adhesive must work together to transmit the strain from the specimen to the grid. In addition, they combine to function as an electrical insulator and heat dissipator. The three primary factors influencing gage selection are: operating temperature, state of strain (gradient, magnitude, and time dependence), and the stability required. Because of its outstanding sensitivity, the Wheatstone bridge circuit is the most frequently used circuit for static strain measurement. Ideally, the strain gage is the only resistor in the circuit that varies, and then only due to a change in strain on the surface. There are two main methods used to indicate the change in resistance caused by strain on a gage in a Wheatstone bridge. Often, an indicator will rebalance the bridge, displaying the change in resistance required in micro-strain. The second method calls for installation of an indicator, calibrated in micro-strain, that responds to the voltage output of the bridge. This method assumes a linear relationship between voltage out and strain, an initially balanced bridge, and a known VIN. In reality, the VOUT-strain relationship is nonlinear, but for strains up to a few thousand micro-strain, the error is not significant. wiring is located in a time-varying magnetic field. POTENTIAL ERROR SOURCES Temperature effects on gage resistance and gage factor should be compensated for as well. This may require measurement of temperature at the gage itself, using thermocouples, thermistors, or RTD’s. Most metallic gage alloys, however, exhibit a nearly linear gage factor variation with temperature over a broad range, which is less than ±1% within ±100°C/180°F. In a stress analysis application, the entire gage installation cannot be calibrated as can some pressure transducers. Therefore, it is important to examine potential error sources prior to taking data. Some gages may be damaged during installation. It is important therefore to check the resistance of the strain gage prior to applying stress. Electrical noise and interference may alter your readings. Shielded leads and adequately insulating coatings may prevent these problems. A value of less than 500 MΩ (using an ohmmeter) usually indicates surface contamination. Thermally induced voltages are caused by thermocouple effects at the junction of dissimilar metals within the measurement circuit. Magnetically induced voltages can occur when E-3 Magnetic induction can be controlled by using twisted lead wires and forming minimum but equal loop areas in each side of the bridge. PRIME STRAIN GAGE SELECTION CONSIDERATIONS • Gage Length • Number of Gages in Gage Pattern • Arrangement of Gages in Gage Pattern • Grid Resistance • Strain-Sensitive Alloy • Carrier Material • Gage Width

THE STRAIN GAGE IS ONE OF THE MOST IMPORTANT TOOLS used to apply electrical measurement techniques to the measurement of mechanical quantities. As their name indicates, they are used for the measurement of strain. As a technical term, “strain” is comprised of tensile and compressive strain, distinguished by a positive or negative sign. Thus, strain gages can be used to detect expansion as well as contraction. Overall Pattern Length End Loops Gage Length The strain of a body is always caused by an external influence or an internal effect. Strain can be caused by forces, pressures, moments,... 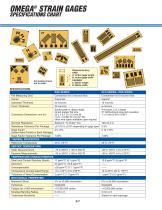 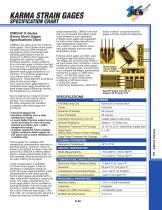 KARMA STRAIN GAGES SPECIFICATION CHART OMEGA® K-Series Karma Strain Gages Specifications Chart OMEGA now offers a full line of Karma strain gages. The K-Series strain gages are often used for OEM transducer applications where transducers with exacting specifications must be produced. K-Series strain gages are designed with optimum backing thickness tolerance. Creep variations from one strain gage to another are kept to a minimum. For batch production, this will keep bridge output differences between strain gage installations to a minimum. The K-Series gages have very uniform matrix or...

All OMEGA catalogs and technical brochures