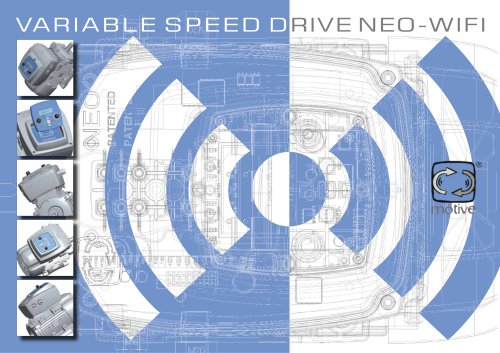 Technical specifications The purpose of an integrated motorinverter is to save time and reduce costs in the study, installation, wiring, programming and testing of the motor + inverter system, as well as the dangers due to errors associated with these operations. However, before the NEOWiFi, there were factors that limited the availability of motor-inverters: the degree of protection that was needed (motors can be installed out in the open, while inverters could not) and the fact that the motorinverter, and therefore its keypad, remain removed from whoever is commanding it (imagine, for...

Rotatable keypad. The keypad is available in two versions: with or without analogue controls. The keypad can be fixed to a metal wall with its magnets or to a concrete wall using inserts. Any NEO can be fixed to a wide range of motors of different power and size. Equipped with PC interface SW for event analysis. 3

Table 1: operating conditions For different environmental conditions contact our Support Service The IPFJ5 degree refers to both the inverter case and to the removable keypad, whether it is placed in the inverter case or whether inverter and keypad are distant from each other. This is possible thanks to: • adoption of an induction powered system instead of "male-female" connectors, • shapes of the cases of the 2 items • special sealing gaskets on the keypad [III. 3] and on the inverter case [III. 4] EMC: The control system has an input filter and complies with the EMC directive, it also...

MOTORS THAT CAN BE CONNECTED Tab. RP: Power range of motors that can be connected The power that can be applied is dependent not only on the electronic characteristics of NEO-WiFi, but also on the dissipative capacity of its case. It is therefore not allowable to use the electronic board in cases that are different from the original one by removing the electronic board and mounting it in another case. Tab. RD: Size range of IEC motors that can be connecte *. after removing the plastic knockout Why connect motors size 112 and 1 32 toil NE0-WiFi-3kW or motors size 1 BO to NE0-VYiPf-7,5kW?...

MECHANICAL ASSEMBLY Plastic knockout removal procedure: motors marked with X in In some sizes of self-braking motors, there may be mechanical interference between NEO and the release lever of the brake when it is in the upper position. In such cases, the release lever can be di- sassembled by unscrewing, or, if it should be kept, it is necessary to rotate by 90° (sizes 71-80], or by 1 20° the rear shield of the motor, together with brake and fan cover. This can only be performed by the factory or by service centres authorized

MECHANICAL ASSEMBL Y Keypad assembly The keypad is available in two versions: Thanks to 4 magnets incorporated into the keypad case (Ill. 6), the keypad safely rests in its housing, in any assembly position. Ill. 6 Standard version IP67 This also offers the advantage of allowing the keypad to be rotated into 4 positions, depending on the preferred point of view potentiometer selector rotation direction Optional version with analog controls IP65 10

If the keypad is removed from the NEO-WiFi case, it can be fixed to the wall in 2 ways. • If the wall is made of metal, by using the • Alternatively, it can be fixed onto 2 magnetism of 4 magnets in the keypad inserts by using the designated slots on BLOCK -induction power support for table or wall mounting Each keypad comes equipped with two rechargeable 250BVH batteries (Diameter • the rechargeable batteries, if they are regularly charged, can last for several years; if not charged for long periods of time x can, it may however become necessary to replace the batteries. The keypad is...

Open the catalog to page 14

Open the catalog to page 15

It is possible to achieve special confi- gurations with constant torque up to In a normal installation, the motor driven at a frequency lower than the rated, for example 20 Hz, will automatically have at the terminals of the windings a voltage lower than the rated one. As the frequen- cy increases, the voltage increases to maintain the torque. Upon achieving 50 Hz we will also have achieved the rated voltage; at this point there will not be room to increase the output voltage of So, for example at 75 Hz we would need (to maintain the same torque present in 50Hz) a higher than the line...

Open the catalog to page 16

All MOTIVE catalogs and technical brochures