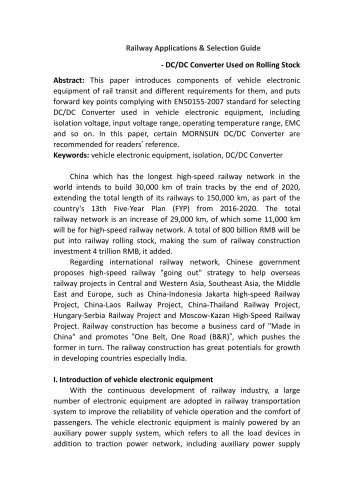 Railway Applications & Selection Guide - DC/DC Converter Used on Rolling Stock Abstract: This paper introduces components of vehicle electronic equipment of rail transit and different requirements for them, and puts forward key points complying with EN50155-2007 standard for selecting DC/DC Converter used in vehicle electronic equipment, including isolation voltage, input voltage range, operating temperature range, EMC and so on. In this paper, certain MORNSUN DC/DC Converter are recommended for readers’ reference. Keywords: vehicle electronic equipment, isolation, DC/DC Converter China which has the longest high-speed railway network in the world intends to build 30,000 km of train tracks by the end of 2020, extending the total length of its railways to 150,000 km, as part of the country's 13th Five-Year Plan (FYP) from 2016-2020. The total railway network is an increase of 29,000 km, of which some 11,000 km will be for high-speed railway network. A total of 800 billion RMB will be put into railway rolling stock, making the sum of railway construction investment 4 trillion RMB, it added. Regarding international railway network, Chinese government proposes high-speed railway "going out" strategy to help overseas railway projects in Central and Western Asia, Southeast Asia, the Middle East and Europe, such as China-Indonesia Jakarta high-speed Railway Project, China-Laos Railway Project, China-Thailand Railway Project, Hungary-Serbia Railway Project and Moscow-Kazan High-Speed Railway Project. Railway construction has become a business card of "Made in China" and promotes “One Belt, One Road (B&R)”, which pushes the former in turn. The railway construction has great potentials for growth in developing countries especially India. I. Introduction of vehicle electronic equipment With the continuous development of railway industry, a large number of electronic equipment are adopted in railway transportation system to improve the reliability of vehicle operation and the comfort of passengers. The vehicle electronic equipment is mainly powered by an auxiliary power supply system, which refers to all the load devices in addition to traction power network, including auxiliary power sup

system and battery system. Usually, these equipment take power from a low-voltage bus power supply. And battery system at normal operation powers Train Control and Management System (TCMS), lighting system, radio and other systems and plays as a role of energy buffering in the case of temporary failure of battery charger. Diagram 1: Battery System Blocks The vehicle electronics mainly consists of TCMS, PIS, PA system, ATC and so on. These systems are isolatedly powered by bus so as to ensure reliable operation of each subsystem, which helps isolate fault areas in case equipment failing. In...

plays an important role in vehicle electronic equipment. However, the equipment changes a lot during operation such as severe vibration and rapid ambient temperature change. It increases difficulties for common industrial-grade power supply to meet the requirements. Then what are the requirements for vehicle power supply? a. Shock and vibration: Railway vehicles are subject to shock and vibration owing to the nature of railway operational environment. Therefore, random shock and vibration tests are required for the installation of electronic equipment. Using a glue to fix the components on...

110V battery float to 125V or low-voltage transformer over 125V. In this situation, 1500VAC isolation is recommended to meet transient over-voltage. MORNSUN 6WR3 railway power converter offering 1500VAC/2250VDC isolation is a good choice. d. Temperature and humidity: To adapt to temperature range and humidity range of railway locomotives for long-distance routes, the vehicle battery should normally operate at ambient temperature range of -40℃ to 85℃, which needs to be verified by reliability tests of High-Low Temperature Test and Damp-Heat Test. MORNSUN railway power converter is monitored...

Common power converter is difficult to meet the requirement of 10mS power interruption and has to add a peripheral capacitor to meet user’s demand. In summary, more attention should be paid to input voltage range, EMC, vibration, isolation and reliability tests when selecting DC/DC Converter used on rolling stock. For more details please visit www.mornsun-power.com. Written by MORNSUN Nov. 2016