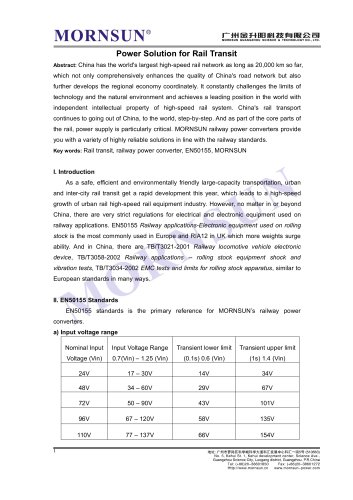 MORNSUN GUANGZHOU SCIENCE & TECHNOLOGY CO., LTD. Abstract: China has the world's largest high-speed rail network as long as 20,000 km so far, which not only comprehensively enhances the quality of China's road network but also further develops the regional economy coordinately. It constantly challenges the limits of technology and the natural environment and achieves a leading position in the world with independent intellectual property of high-speed rail system. China's rail transport continues to going out of China, to the world, step-by-step. And as part of the core parts of the rail, power supply is particularly critical. MORNSUN railway power converters provide you with a variety of highly reliable solutions in line with the railway standards. Keywords: Rail transit, railway power converter, EN50155, MORNSUN I. Introduction As a safe, efficient and environmentally friendly large-capacity transportation, urban and inter-city rail transit get a rapid development this year, which leads to a high-speed growth of urban rail high-speed rail equipment industry. However, no matter in or beyond China, there are very strict regulations for electrical and electronic equipment used on railway applications. EN50155 Railway applications-Electronic equipment used on rolling stock is the most commonly used in Europe and RIA12 in UK which more weights surge ability. And in China, there are TB/T3021-2001 Railway locomotive vehicle electronic device, TB/T3058-2002 Railway applications -- rolling stock equipment shock and vibration tests, TB/T3034-2002 EMC tests and limits for rolling stock apparatus, similar to European standards in many ways. II. EN50155 Standards EN50155 standards is the primary reference for MORNSUN’s railway power converters. a) Input voltage range 1 No. 5, Kehui St. 1, Kehui development center, Science Ave., Guangzhou Science City, Luogang district, Guangzhou, P R.China Tel: (+86)20-38601850 Fax: (+86)20-38601272 Http://www. mornsun.cn www.mornsun-power.com

MORNSUN GUANGZHOU SCIENCE & TECHNOLOGY CO., LTD. b) Interruptions of voltage supply Interruptions of up to 10 ms may occur on input voltage as defined below: -Class S1: no interruptions -Class S2: 10ms interruptions This shall not cause any equipment failure. This time values specified are for nominal voltage and choice of classes shall be defined by the system designer. c) Ambient temperature A sliding plug door is a door designed to seal itself with steps of plug and pull by taking advantage of pressure difference on its two sides and is typically used on subway, train and so on. First,...