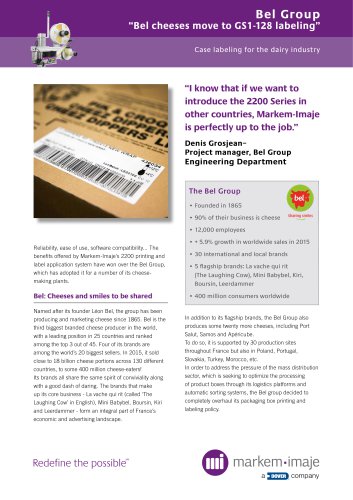 Bel Group “Bel cheeses move to GS1-128 labeling” Case labeling for the dairy industry Reliability, ease of use, software compatibility... The benefits offered by Markem-Imaje's 2200 printing and label application system have won over the Bel Group, which has adopted it for a number of its cheese-making plants. Bel: Cheeses and smiles to be shared “I know that if we want to introduce the 2200 Series in other countries, Markem-Imaje is perfectly up to the job.” Denis Grosjean-Project manager, Bel Group Engineering Department The Bel Group • Foundedin 1865 • 90% of their business is cheese • 12,000 employees • + 5.9% growth in worldwide sales in 2015 • 30 international and local brands • 5 flagship brands: La vache qui rit (The Laughing Cow), Mini Babybel, Kiri, Boursin, Leerdammer • 400 million consumers worldwide Named after its founder Léon Bel, the group has been producing and marketing cheese since 1865. Bel is the third biggest branded cheese producer in the world, with a leading position in 25 countries and ranked among the top 3 out of 45. Four of its brands are among the world's 20 biggest sellers. In 2015, it sold close to 18 billion cheese portions across 130 different countries, to some 400 million cheese-eaters! Its brands all share the same spirit of conviviality along with a good dash of daring. The brands that make up its core business - La vache qui rit (called ‘The Laughing Cow' in English), Mini Babybel, Boursin, Kiri and Leerdammer - form an integral part of France's economic and advertising landscape. In addition to its flagship brands, the Bel Group also produces some twenty more cheeses, including Port Salut, Samos and Apéricube. To do so, it is supported by 30 production sites throughout France but also in Poland, Portugal, Slovakia, Turkey, Morocco, etc. In order to address the pressure of the mass distribution sector, which is seeking to optimize the processing of product boxes through its logistics platforms and automatic sorting systems, the Bel group decided to completely overhaul its packaging box printing and labeling policy. markem-imajea    company

To meet the demands of the mass distribution sector, seeking to improve the speed at which boxes are processed within its logistics platforms, the Bel group revised its carton labeling policy, adopting Markem-Imaje’s 2200 Series systems. Photos: Laurent Cipriani / CAPA Pictures / Markem-Imaje - 01/2017 For more case studies, visit www.markem-imaje.com r    n The Markem-Imaje solution: The 2200 Series system "We needed to change our labeling system in Europe to include the new GS1-128 barcode symbols, which are more complex and complete in terms of information provided,” explains Denis...

All MARKEM-IMAJE catalogs and technical brochures