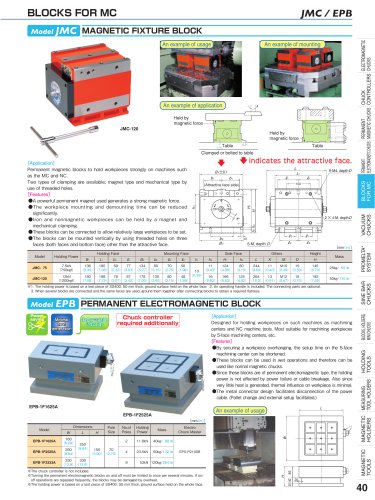 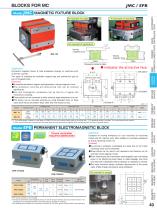 ( An example of application ) Held by magnetic force- Held by magnetic force [Application] Permanent magnetic blocks to hold workpieces strongly on machines such as the MC and NC. Two types of clamping are available; magnet type and mechanical type by use of threaded holes. [Features] •A powerful permanent magnet used generates a strong magnetic force. •The workpiece mounting and demounting time can be reduced significantly. • I ron and nonmagnetic workpieces can be held by a magnet and mechanical clamping. •These blocks can be connected to allow relatively large workpieces to be set. •The blocks can be mounted vertically by using threaded holes on three faces (both faces and bottom face) other than the attractive face. Clamped or bolted to table indicates the attractive face. ^1. The holding power is based on a test piece of SS400, 50 mm thick, ground surface held on the whole face. 2. An operating handle is included. The connecting parts are optional. 3. When several blocks are connected and the same faces are used, ground them together after connecting blocks to obtain a required flatness. PERMANENT ELECTROMAGNETIC BLOCK Chuck controller required additionally [Application] Designed for holding workpieces on such machines as machining centers and NC machine tools. Most suitable for machining workpieces by 5-face machining centers, etc. [Features] •By securing a workpiece overhanging, the setup time on the 5-face machining center can be shortened. •These blocks can be used in wet operations and therefore can be used like normal magnetic chucks. •Since these blocks are of permanent electromagnetic type, the holding power is not affected by power failure or cable breakage. Also since very little heat is generated, thermal influence on workpiece is minimal. •The metal connector design facilitates disconnection of the power cable. (Pallet change and external setup facilitated.) ^The chuck controller is not included. ^Turning the permanent electromagnetic blocks on and off must be limited to once per several minutes. If on/ off operations are repeated frequently, the blocks may be damaged by overheat. ^The holding power is based on a test piece of SS400, 50 mm thick, ground surface held on the whole face. MAGNETIC ; MAGNETIC MEASURING ; HOLDING ; BLOCKS, HOLDERS, ; SINE BAR ; PROMELTA* ; VACUUM ■3IS05MPERMANENT PERMANENT CHUCK ELECTROMAGNETIC TOOLS i HOLDERS TOOL HOLDERS TOOLS i MINI CHUCKS i CHUCKS i SYSTEM i CHUCKS ■FORI^B ELECTROMAGNETIC CHUCKS i MAGNETIC CHUCKS: CONTROLLERS: CHUCKS 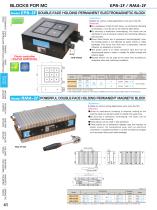 All Kanetec catalogs and technical brochures