The Future needs the Past
11Pages 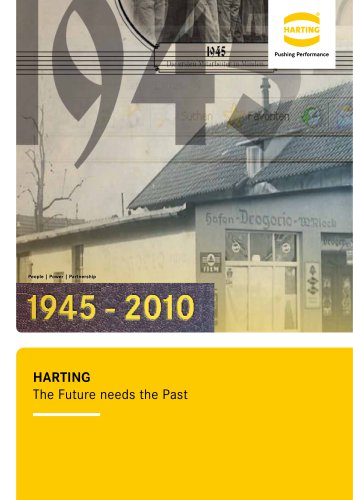 People | Power | Partnership The Future needs the Past

shape the future with technologies for people. Our company history now spans more than 60 years – a reason to be proud, but also an obligation for the future. As in the past, we remain committed to the aim of being more to our clients than a supplier. For us, the decisive emphasis is on enhancing our long-term customer relations and partnerships. With our technologies and innovations, but also on the strength of our quality and reliability, we strive to not only increase customer benefits, but to win the trust of our partners time and time again. “The Future needs the Past” Odo Marquard,...

“Hofhund” electric fence unit Energy-saving lamp Waffle iron first products, first successes – motivation in the days of the new beginning On 1st September 1945, Wilhelm and Marie H ­ arting established the company, “Wilhelm Harting M ­ echanische Werkstätten”. A small hall measuring around 100 sq. m in a repair workshop in the town of Minden became the company premises. The first members of staff in Minden irons and stoves, which she exchanged for bread, peas and beans, cooking fat etc. The size and number of orders increased steadily, as did the workforce, which grew to 40 within two...

Launch of vending machines – The product range expands 1957 – 1962 The “wedding” between P ­ icker and HARTING lasted five years The company founder, Wilhelm Harting, died on 23rd February Marie Harting takes over the management of the company after her husband‘s death Dietmar Harting (Dipl.-Kfm.) joins the company 1958 Shoot-stop erase magnet for jukeboxes Jürgen Harting (Dipl.-Ing.) takes up his post The wedding bells ring for Margrit Kohlhase and Dietmar Harting When Wilhelm Harting died in 1962, his company already employed more than 700 staff. After the death of her husband, Marie...

Expansion into fibre optics production Production of cigarette vending machines makes progress 1979 Housing manufacture in the connector production area 1979 Aerial photograph of the completed Plant 2 PCB connector in accordance with DIN 41 612 Expansion and development in Espelkamp 1979 The third generation, Philip (born 1974) and Maresa (born 1977), digging merrily Ever since the 1970s, production of PCB connectors has been in full swing. In the middle of that decade, production and sale of jukeboxes ended, and the company focused on cigarette vending machines for indoor use and on...

expansion of production - worldwide 1983 The production plant in Biel Plant 3 is built on Industrial Estate North At the beginning of the 1980s, the automobile electrics sector was sold and a manufacturing plant established in Great Britain. Four years later, the second construction stage of Plant 2 in Espelkamp began. In 1983, flat cable connector production was set up in Biel, the Swiss watchmaking centre, a production building was erected, and was enlarged with another construction stage two years later. Marie Harting was dedicated to the company Margrit Harting joined the GmbH as...

1991-2000 1995 50th anniversary celebration. From l. to r.: Dietmar Harting, Margrit Harting and Minister-President of NRW, Johannes Rau The motto is: People – Power – Partnership • At the beginning of the 1990s, HARTING started developing and manufacturing a new metric system for PCB connectors. • 1992/93 saw the launch of the innovative “Smokythek”, an electric cigarette dispenser for retail food shops, which is well received by both the German and European markets. • On 1st September 1995, the company‘s 50th anniversary was celebrated in style with a special concert. Minister-President...

Fast Track Switching • The new millennium points to a new direction for the Technology Group. The three areas of Installation Technology, Device Connectivity and Automation IT join as a triad under the product portfolio of the largest business area, Connectivity & Networks. 2008 The new HARTING training center (NAZHA) is opened. • 2003 and 2004 bring new responsibilities for Dietmar Harting: he is appointed President of the DIN and Honorary President of the ZVEI for life. Circular connector with HARAX® rapid connection technology • In October 2004, HARTING Mitronics joins the Swiss site in...

LOGO? – LOGO! HARTING – design down the decades HARTING makes a name for itself At HARTING, the logo as a distinguishing feature has been part of the corporate philosophy from the very beginning. For decades, it has stood for consistent quality, innovation and worldwide commitment. Its external appearance, on the other hand, has always moved with the times – it is innovative, just like the products on which it appears. What’s in a name? A lot. Especially if it becomes a trademark associated with certain characteristics, core competences and quality statements. Development of the HARTING...

All HARTING catalogs and technical brochures