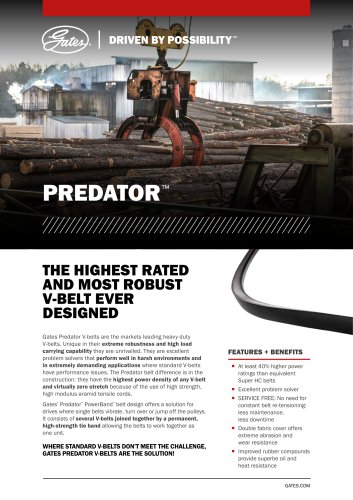 Predator® The highest rated and most robust V-belt ever designed Gates Predator® V-belts, Gates’ most recent addition to the range, are the markets’ leading V-belts. Unique in their extreme robustness and high load carrying capability they are unrivalled. They are excellent problem solvers that perform well in harsh environments and in extremely demanding applications where standard V-belts have performance issues. Where standard V-belts don’t meet the challenge, Gates Predator® V-belts are the solution! The Predator® belt difference is in the construction: they have the highest power density of any V-belt and virtually zero stretch because of the use of high strength, high modulus aramid tensile cords. Gates Predator® V-belts are available as PowerBand® belts in SPBP, SPCP, 9JP, 15JP and 8VP sections and on demand as single belts in AP, BP, CP, SPBP and SPCP sections. Designed for the toughest and most aggressive applications and environments

Predator® The highest rated and most robust V-belt ever designed Gates Predator® V-belts are built with aramid tensile cords for unparalleled shock and stretch resistance. A specially treated double fabric cover provides abrasion resistance that is unique to Gates Predator® V-belts and makes them withstand debris, punctures, slippage and shearing forces. The outer surface of the double fabric cover is manufactured in a bare back (non rubber impregnated) construction to provide the ability to slip gracefully under heavy shock and impulse loads. Slippage that would destroy any other belt is...

Predator® The highest rated and most robust V-belt ever designed 15JP Description Standard number of ribs SPBP SPCP 9JP 15JP 8VP Other number of ribs available on request; see note under each chart. Dimensions in bold are available from stock. Your distributor: The manufacturers reserve the right to amend details where necessary. Predator® ordering code is composed as follows: Example: SPBP3350/3 SPBP - Section 3350 - Datum length (mm) 3 - Number of ribs