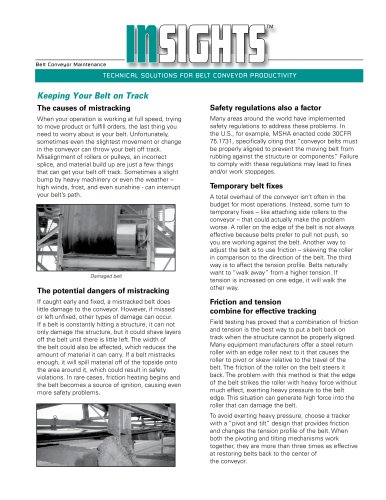 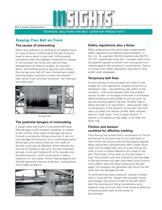 Belt Conveyor Maintenance TECHNICAL SOLUTIONS FOR BELT CONVEYOR PRODUCTIVITY Keeping Your Belt on Track The causes of mistracking Safety regulations also a factor When your operation is working at full speed, trying to move product or fulfill orders, the last thing you need to worry about is your belt. Unfortunately, sometimes even the slightest movement or change in the conveyor can throw your belt off track. Misalignment of rollers or pulleys, an incorrect splice, and material build up are just a few things that can get your belt off track. Sometimes a slight bump by heavy machinery or even the weather – high winds, frost, and even sunshine - can interrupt your belt’s path. Many areas around the world have implemented safety regulations to address these problems. In the U.S., for example, MSHA enacted code 30CFR 75.1731, specifically citing that “conveyor belts must be properly aligned to prevent the moving belt from rubbing against the structure or components. Failure ” to comply with these regulations may lead to fines and/or work stoppages. Damaged belt The potential dangers of mistracking If caught early and fixed, a mistracked belt does little damage to the conveyor. However, if missed or left unfixed, other types of damage can occur. If a belt is constantly hitting a structure, it can not only damage the structure, but it could shave layers off the belt until there is little left. The width of the belt could also be affected, which reduces the amount of material it can carry. If a belt mistracks enough, it will spill material off of the topside onto the area around it, which could result in safety violations. In rare cases, friction heating begins and the belt becomes a source of ignition, causing even more safety problems. Temporary belt fixes A total overhaul of the conveyor isn’t often in the budget for most operations. Instead, some turn to temporary fixes – like attaching side rollers to the conveyor – that could actually make the problem worse. A roller on the edge of the belt is not always effective because belts prefer to pull not push, so you are working against the belt. Another way to adjust the belt is to use friction – skewing the roller in comparison to the direction of the belt. The third way is to affect the tension profile. Belts naturally want to “walk away” from a higher tension. If tension is increased on one edge, it will walk the other way. Friction and tension combine for effective tracking Field testing has proved that a combination of friction and tension is the best way to put a belt back on track when the structure cannot be properly aligned. Many equipment manufacturers offer a steel return roller with an edge roller next to it that causes the roller to pivot or skew relative to the travel of the belt. The friction of the roller on the belt steers it back. The problem with this method is that the edge of the belt strikes the roller with heavy force without much effect, exerting heavy pressure to the belt edge. This situation can generate high force into the roller that can damage the belt. To avoid exerting heavy pressure, choose a tracker with a “pivot and tilt” design that provides friction and changes the tension profile of the belt. When both the pivoting and tilting mechanisms work together, they are more than three times as effective at restoring belts back to the center of the conveyor. 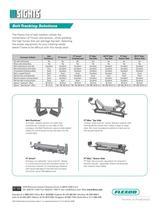 Belt Tracking Solutions The Flexco line of belt trackers utilizes the combination of friction and tension, while avoiding the high forces that can damage the belt. Selecting the proper equipment for your tracking needs doesn't have to be difficult with this handy chart. Belt Positioner™ A simple, reliable solution for belts that consistently mistrack to one side of the conveyor, the Belt Positioner uses simple angled rollers to continuously funnel the belt into the correct path. Employs our patented "pivot and tilt" design in a more economical and standard trainer. A continuous solution to...

All FLEXCO catalogs and technical brochures