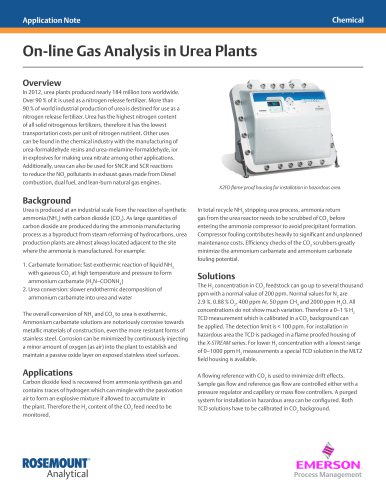 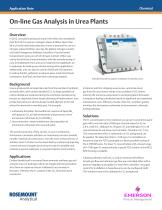 Application Note On-line Gas Analysis in Urea Plants Overview In 2012, urea plants produced nearly 184 million tons worldwide. Over 90 % of it is used as a nitrogen release fertilizer. More than 90 % of world industrial production of urea is destined for use as a nitrogen release fertilizer. Urea has the highest nitrogen content of all solid nitrogenous fertilizers, therefore it has the lowest transportation costs per unit of nitrogen nutrient. Other uses can be found in the chemical industry with the manufacturing of urea-formaldehyde resins and urea-melamine-formaldehyde, ior in explosives for making urea nitrate among other applications. Additionally, urea can also be used for SNCR and SCR reactions to reduce the NOx pollutants in exhaust gases made from Diesel combustion, dual fuel, and lean-burn natural gas engines. X2FD flame proof housing for installation in hazardous area. Background Urea is produced at an industrial scale from the reaction of synthetic ammonia (NH3) with carbon dioxide (CO2). As large quantities of carbon dioxide are produced during the ammonia manufacturing process as a byproduct from steam reforming of hydrocarbons, urea production plants are almost always located adjacent to the site where the ammonia is manufactured. For example: 1. Carbamate formation: fast exothermic reaction of liquid NH3 with gaseous CO2 at high temperature and pressure to form ammonium carbamate (H2N–COONH4) 2. Urea conversion: slower endothermic decomposition of ammonium carbamate into urea and water The overall conversion of NH3 and CO2 to urea is exothermic. Ammonium carbamate solutions are notoriously corrosive towards metallic materials of construction, even the more resistant forms of stainless steel. Corrosion can be minimized by continuously injecting a minor amount of oxygen (as air) into the plant to establish and maintain a passive oxide layer on exposed stainless steel surfaces. Applications Carbon dioxide feed is recovered from ammonia synthesis gas and contains traces of hydrogen which can mingle with the passivation air to form an explosive mixture if allowed to accumulate in the plant. Therefore the H2 content of the CO2 feed need to be monitored. In total recycle NH3 stripping urea process, ammonia return gas from the urea reactor needs to be scrubbed of CO2 before entering the ammonia compressor to avoid precipitant formation. Compressor fouling contributes heavily to significant and unplanned maintenance costs. Efficiency checks of the CO2 scrubbers greatly minimize the ammonium carbamate and ammonium carbonate fouling potential. Solutions The H2 concentration in CO2 feedstock can go up to several thousand ppm with a normal value of 200 ppm. Normal values for N2 are 2.9 %, 0.88 % O2, 400 ppm Ar, 50 ppm CH4 and 2000 ppm H2O. All concentrations do not show much variation. Therefore a 0–1 % H2 TCD measurement which is calibrated in a CO2 background can be applied. The detection limit is < 100 ppm. For installation in hazardous area the TCD is packaged in a flame proofed housing of the X-STREAM series. For lower H2 concentration with a lowest range of 0–1000 ppm H2 measurements a special TCD solution in the MLT2 field housing is available. A flowing reference with CO2 is used to minimize drift effects. Sample gas flow and reference gas flow are controlled either with a pressure regulator and capillary or mass flow controllers. A purged system for installation in hazardous area can be configured. Both TCD solutions have to be calibrated in CO2 background. 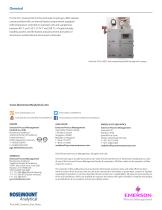