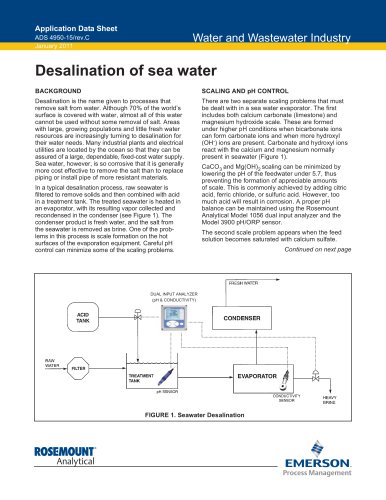 Application Data Sheet Water and Wastewater Industry Desalination of sea water BACKGROUND Desalination is the name given to processes that remove salt from water. Although 70% of the world’s surface is covered with water, almost all of this water cannot be used without some removal of salt. Areas with large, growing populations and little fresh water resources are increasingly turning to desalination for their water needs. Many industrial plants and electrical utilities are located by the ocean so that they can be assured of a large, dependable, fixed-cost water supply. Sea water, however, is so corrosive that it is generally more cost effective to remove the salt than to replace piping or install pipe of more resistant materials. There are two separate scaling problems that must be dealt with in a sea water evaporator. The first includes both calcium carbonate (limestone) and magnesium hydroxide scale. These are formed under higher pH conditions when bicarbonate ions can form carbonate ions and when more hydroxyl (OH-) ions are present. Carbonate and hydroxyl ions react with the calcium and magnesium normally present in seawater (Figure 1). In a typical desalination process, raw seawater is filtered to remove solids and then combined with acid in a treatment tank. The treated seawater is heated in an evaporator, with its resulting vapor collected and recondensed in the condenser (see Figure 1). The condenser product is fresh water, and the salt from the seawater is removed as brine. One of the problems in this process is scale formation on the hot surfaces of the evaporation equipment. Careful pH control can minimize some of the scaling problems. CaCO3 and Mg(OH)2 scaling can be minimized by lowering the pH of the feedwater under 5.7, thus preventing the formation of appreciable amounts of scale. This is commonly achieved by adding citric acid, ferric chloride, or sulfuric acid. However, too much acid will result in corrosion. A proper pH balance can be maintained using the Rosemount Analytical Model 1056 dual input analyzer and the Model 3900 pH/ORP sensor. The second scale problem appears when the feed solution becomes saturated with calcium sulfate. DUAL INPUT ANALYZER (pH & CONDUCTIVITY) FIGURE 1. Seawater Desalination Continued on next page

CaSO4 cannot be controlled by pH adjustment. It is necessary to maintain the CaSO4 concentration below the saturation point (roughly 2 gpl) by removing a portion of the heavy brine in the evaporator. Although measuring conductivity does not provide a specific indication of the concentration of calcium sulfate, it does correlate to the level of all dissolved solids.The Rosemount Analytical Model 1056 dual input analyzer and the Model 228 toroidal conductivity sensor can be used to prevent the excessive buildup of the dissolved solids that would lead to fouling in the evaporator. The Model...