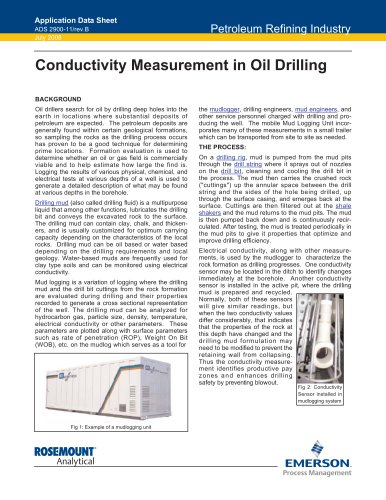 Application Data Sheet ADS 2900-11/rev.B July 2008 Petroleum Refining Industry Conductivity Measurement in Oil Drilling BACKGROUND Oil drillers search for oil by drilling deep holes into the earth in locations where substantial deposits of petroleum are expected. The petroleum deposits are generally found within certain geological formations, so sampling the rocks as the drilling process occurs has proven to be a good technique for determining prime locations. Formation evaluation is used to determine whether an oil or gas field is commercially viable and to help estimate how large the find is. Logging the results of various physical, chemical, and electrical tests at various depths of a well is used to generate a detailed description of what may be found at various depths in the borehole. Drilling mud (also called drilling fluid) is a multipurpose liquid that among other functions, lubricates the drilling bit and conveys the excavated rock to the surface. The drilling mud can contain clay, chalk, and thickeners, and is usually customized for optimum carrying capacity depending on the characteristics of the local rocks. Drilling mud can be oil based or water based depending on the drilling requirements and local geology. Water-based muds are frequently used for clay type soils and can be monitored using electrical conductivity. Mud logging is a variation of logging where the drilling mud and the drill bit cuttings from the rock formation are evaluated during drilling and their properties recorded to generate a cross sectional representation of the well. The drilling mud can be analyzed for hydrocarbon gas, particle size, density, temperature, electrical conductivity or other parameters. These parameters are plotted along with surface parameters such as rate of penetration (ROP), Weight On Bit (WOB), etc. on the mudlog which serves as a tool for the mudlogger, drilling engineers, mud engineers, and other service personnel charged with drilling and producing the well. The mobile Mud Logging Unit incorporates many of these measurements in a small trailer which can be transported from site to site as needed. THE PROCESS: On a drilling rig, mud is pumped from the mud pits through the drill string where it sprays out of nozzles on the drill bit, cleaning and cooling the drill bit in the process. The mud then carries the crushed rock ("cuttings") up the annular space between the drill string and the sides of the hole being drilled, up through the surface casing, and emerges back at the surface. Cuttings are then filtered out at the shale shakers and the mud returns to the mud pits. The mud is then pumped back down and is continuously recirculated. After testing, the mud is treated periodically in the mud pits to give it properties that optimize and improve drilling efficiency. Electrical conductivity, along with other measurements, is used by the mudlogger to characterize the rock formation as drilling progresses. One conductivity sensor may be located in the ditch to identify changes immediately at the borehole. Another conductivity sensor is installed in the active pit, where the drilling mud is prepared and recycled. Normally, both of these sensors will give similar readings, but when the two conductivity values differ considerably, that indicates that the properties of the rock at this depth have changed and the drilling mud formulation may need to be modified to prevent the retaining wall from collapsing. Thus the conductivity measurement identifies productive pay zones a n d enhances drilling safety by preventing blowout. Fig 2: Conductivity Sensor installed in mudlogging system Fig 1: Example of a mudlogging unit 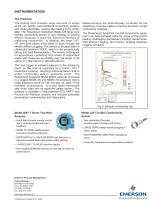 INSTRUMENTATION The Products: The drilling mud contains large amounts of solids which can rapidly coat traditional conductivity sensors with metal electrodes, causing the reading to be unreliable. The Rosemount Analytical Model 226 large bore toroidal conductivity sensor is very resistant to coating effects because it uses the inductive method of measuring conductivity. In addition, the large 1.87” (47 mm) bore allows most solids to pass through the sensor without plugging. The sensor is encapsulated in chemically resistant PEEK, which is an exceptionally strong and hard thermoplastic. The...