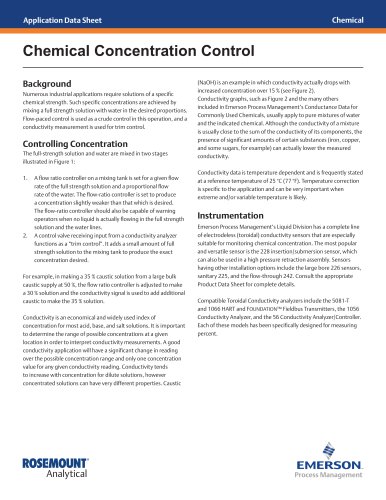 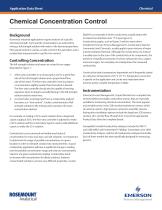 Application Data Sheet Chemical Concentration Control Background Numerous industrial applications require solutions of a specific chemical strength. Such specific concentrations are achieved by mixing a full strength solution with water in the desired proportions. Flow-paced control is used as a crude control in this operation, and a conductivity measurement is used for trim control. Controlling Concentration The full-strength solution and water are mixed in two stages illustrated in Figure 1: 1. A flow ratio controller on a mixing tank is set for a given flow rate of the full strength solution and a proportional flow rate of the water. The flow-ratio controller is set to produce a concentration slightly weaker than that which is desired. The flow-ratio controller should also be capable of warning operators when no liquid is actually flowing in the full strength solution and the water lines. 2. A control valve receiving input from a conductivity analyzer functions as a “trim control”. It adds a small amount of full strength solution to the mixing tank to produce the exact concentration desired. For example, in making a 35 % caustic solution from a large bulk caustic supply at 50 %, the flow ratio controller is adjusted to make a 30 % solution and the conductivity signal is used to add additional caustic to make the 35 % solution. Conductivity is an economical and widely used index of concentration for most acid, base, and salt solutions. It is important to determine the range of possible concentrations at a given location in order to interpret conductivity measurements. A good conductivity application will have a significant change in reading over the possible concentration range and only one concentration value for any given conductivity reading. Conductivity tends to increase with concentration for dilute solutions, however concentrated solutions can have very different properties. Caustic (NaOH) is an example in which conductivity actually drops with increased concentration over 15 % (see Figure 2). Conductivity graphs, such as Figure 2 and the many others included in Emerson Process Management’s Conductance Data for Commonly Used Chemicals, usually apply to pure mixtures of water and the indicated chemical. Although the conductivity of a mixture is usually close to the sum of the conductivity of its components, the presence of significant amounts of certain substances (iron, copper, and some sugars, for example) can actually lower the measured conductivity. Conductivity data is temperature dependent and is frequently stated at a reference temperature of 25 °C (77 °F). Temperature correction is specific to the application and can be very important when extreme and/or variable temperature is likely. Instrumentation Emerson Process Management’s Liquid Division has a complete line of electrodeless (toroidal) conductivity sensors that are especially suitable for monitoring chemical concentration. The most popular and versatile sensor is the 228 insertion/submersion sensor, which can also be used in a high pressure retraction assembly. Sensors having other installation options include the large bore 226 sensors, sanitary 225, and the flow-through 242. Consult the appropriate Product Data Sheet for complete details. Compatible Toroidal Conductivity analyzers include the 5081-T and 1066 HART and FOUNDATION™ Fieldbus Transmitters, the 1056 Conductivity Analyzer, and the 56 Conductivity Analyzer/Controller. Each of these models has been specifically designed for measuring percent. 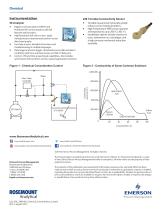