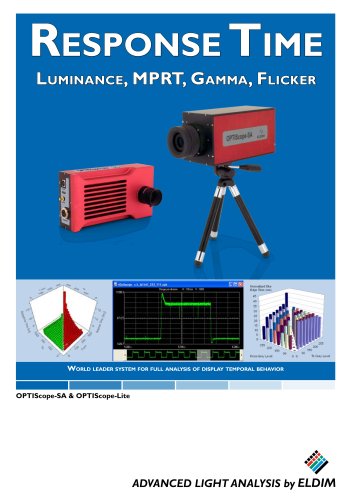 OPTIScope-SA Temporal Analyser Series Light collection and temporal analysis OPTIScope-SA system OPTIScope-SA looks like a conventional camera but includes all the hardware needed for temporal and luminance measurements. An imaging objective collects the light in a angular aperture of ±1° following VESA standard. An image of the target is obtained with a color CMOS sensor. Part of the light goes on a photomultiplier across a photo peak filter. The system can also measure absolute luminance measurements thanks to an internal autocalibration device that readjust the photomultiplier...

Temporal Analyser Series Original object Perceived object Moving Picture Response Time (MPRT) One of the main motion artifacts on flat panel displays is motion blur. The new VESA FPDM section addressing this problem introduces moving edge-blur that can be measured by various instruments like pursuit cameras. This eva- luation is near the real conditions but generally tedious and expensive due to the cost of the instruments and their complexity. It results in moving picture response time behaviors versus gray levels generally measured in very strict moving configurations. OPTIScope offers...

Temporal Analyser Series Photodiode calibration Measured gamma curve of a LCD display Luminance, Gamma curves and Flicker Response time measurements are generally made between one grey level to another grey level. Complete analysis is made with a step in grey levels from 0 to 255 (for example 16 levels). Nevertheless, the observer is not concerned by the grey level value but moreover with the luminance emitted by the display for this grey level. It is more effi- cient to make the response time analysis with fixed steps in luminance instead of fixed steps in grey level. Self calibration...

Temporal Analyser Series OPTIScope comes with a complete software solution for automated measurement and data analysis.All the fea- tures can be also addressed by other softwares using ActiveX capacities. Programming examples are provided Some characteristics of the DisplaySpec software package

All ELDIM catalogs and technical brochures