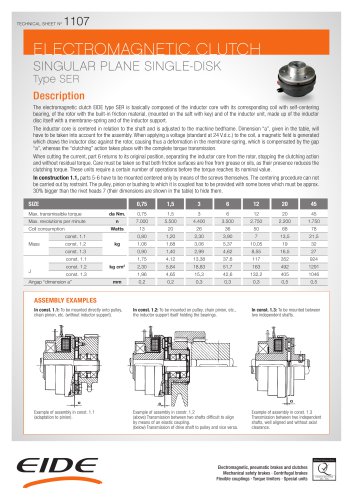 SINGULAR PLANE SINGLE-DISK Type SER Description The electromagnetic clutch EIDE type SER is basically composed of the inductor core with its corresponding coil with self-centering bearing, of the rotor with the built-in friction material, (mounted on the saft with key) and of the inductor unit, made up of the inductor disc itself with a membrane-spring and of the inductor support. The inductor core is centered in relation to the shaft and is adjusted to the machine bedframe. Dimension “a”, given in the table, will have to be taken into account for the assembly. When applying a voltage (standard at 24 V.d.c.) to the coil, a magnetic field is generated which draws the inductor disc against the rotor, causing thus a deformation in the membrane-spring, which is compensated by the gap “a”, whereas the “clutching” action takes place with the complete torque transmission. When cutting the current, part 6 returns to its original position, separating the inductor core from the rotor, stopping the clutching action and without residual torque. Care must be taken so that both friction surfaces are free from grease or oils, as their presence reduces the clutching torque. These units require a certain number of operations before the torque reaches its nominal value. In construction 1.1, parts 5-6 have to be mounted centered only by means of the screws themselves. The centering procedure can not be carried out by restraint. The pulley, pinion or bushing to which it is coupled has to be provided with some bores which must be approx. 30% bigger than the rivet heads 7 (their dimensions are shown in the table) to hide them. ASSEMBLY EXAMPLES In const. 1.1: To be mounted directly onto pulley, chain pinion, etc. (without inductor support).

All EIDE catalogs and technical brochures