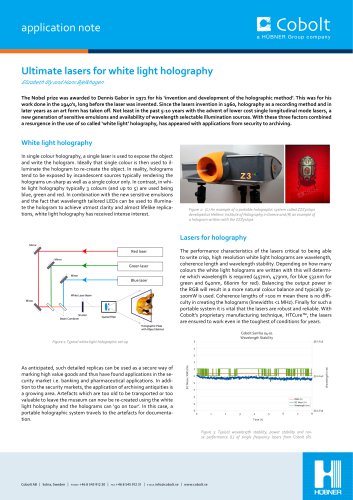 application note Ultimate lasers for white light holography Elizabeth Illy and Hans Bjelkhagen The Nobel prize was awarded to Dennis Gabor in 1971 for his ‘invention and development of the holographic method’. This was for his work done in the 1940’s, long before the laser was invented. Since the lasers invention in 1960, holography as a recording method and in later years as an art form has taken off. Not least in the past 5-10 years with the advent of lower cost single longitudinal mode lasers, a new generation of sensitive emulsions and availability of wavelength selectable illumination sources. With these three factors combined a resurgence in the use of so called ‘white light’ holography, has appeared with applications from security to archiving. White light holography In single colour holography, a single laser is used to expose the object and write the hologram. Ideally that single colour is then used to illuminate the hologram to re-create the object. In reality, holograms tend to be exposed by incandescent sources typically rendering the holograms un-sharp as well as a single colour only. In contrast, in white light holography typically 3 colours (and up to 5) are used being blue, green and red. In combination with the new sensitive emulsions and the fact that wavelength tailored LEDs can be used to illuminate the hologram to achieve utmost clarity and almost lifelike replications, white light holography has received intense interest. Figure 2: (L) An example of a portable holographic system called ZZZyclops developed at Hellenic Institute of Holography in Greece and (R) an example of a hologram written with the ZZZyclops. Lasers for holography Red laser Green laser Blue laser The performance characteristics of the lasers critical to being able to write crisp, high resolution white light holograms are wavelength, coherence length and wavelength stability. Depending on how many colours the white light holograms are written with this will determine which wavelength is required (457nm, 473nm, for blue 532nm for green and 640nm, 660nm for red). Balancing the output power in the RGB will result in a more natural colour balance and typically 50100mW is used. Coherence lengths of >100 m mean there is no difficulty in creating the holograms (linewidths <1 MHz). Finally for such a portable system it is vital that the lasers are robust and reliable. With Cobolt’s proprietary manufacturing technique, HTCure™, the lasers are ensured to work even in the toughest of conditions for years. Figure 1: Typical white light holographic set-up As anticipated, such detailed replicas can be used as a secure way of marking high value goods and thus have found applications in the security market i.e. banking and pharmaceutical applications. In addition to the security markets, the application of archiving antiquities is a growing area. Artefacts which are too old to be transported or too valuable to leave the museum can now be re-created using the white light holography and the holograms can ‘go on tour’. In this case, a portable holographic system travels to the artefacts for documentation. Figure 3: Typical wavelength stability, power stability and noise performance (L) of single frequency lasers from Cobolt (R). Copyright ®Cobolt AB. | PHONE +46 8reserved | All rights 545 912 30 Cobolt AB | Solna, Sweden Cobolt Headoffice, Sweden www.cobolt.se FAX E-MAIL info@cobolt.se

application note Figure 4: Single frequency laser from Cobolt ”The Cobolt Twist and Samba have been proved an excellent choice for our mobile color holography camera. The lasers perform according to their published specifications. I never encountered an instance of mode hops even under, most important to our work, extremely diverse environmental conditions. It is also comforting to know that the remote tuning system of the lasers is available and fully functional if ever needed.” Andreas Sarakinos Scientific Director and Head Holographer The Hellenic Institute of Holography Conclusion White...

All COBOLT catalogs and technical brochures