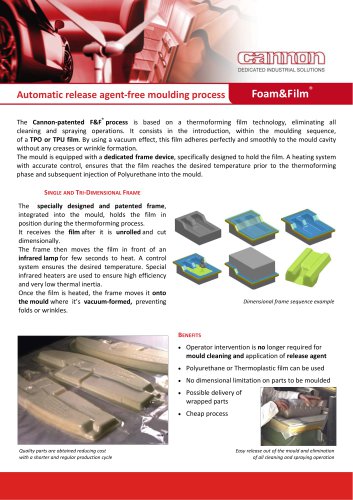 The Cannon‐patented F&F® process is based on a thermoforming film technology, eliminating all cleaning and spraying operations. It consists in the introduction, within the moulding sequence, of a TPO or TPU film. By using a vacuum effect, this film adheres perfectly and smoothly to the mould cavity without any creases or wrinkle formation. The mould is equipped with a dedicated frame device, specifically designed to hold the film. A heating system with accurate control, ensures that the film reaches the desired temperature prior to the thermoforming phase and subsequent injection of Polyurethane into the mould. SINGLE AND TRI‐DIMENSIONAL FRAME The specially designed and patented frame, integrated into the mould, holds the film in position during the thermoforming process. It receives the film after it is unrolled and cut dimensionally. The frame then moves the film in front of an infrared lamp for few seconds to heat. A control system ensures the desired temperature. Special infrared heaters are used to ensure high efficiency and very low thermal inertia. Once the film is heated, the frame moves it onto the mould where it’s vacuum‐formed, preventing folds or wrinkles. BENEFITS • Operator intervention is no longer required for mould cleaning and application of release agent • Polyurethane or Thermoplastic film can be used • No dimensional limitation on parts