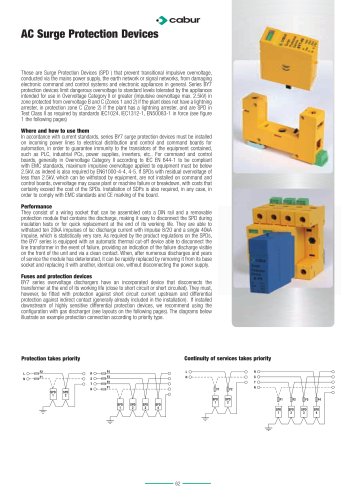 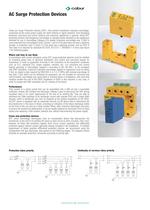 62 These are Surge Protection Devices (SPD ) that prevent transitional impulsive overvoltage, conducted via the mains power supply, the earth network or signal networks, from damaging electronic command and control systems and electronic appliances in general. Series BY7 protection devices limit dangerous overvoltage to standard levels tolerated by the appliances intended for use in Overvoltage Category II or greater (impulsive overvoltage max. 2.5kV) in zone protected from overvoltage B and C (Zones 1 and 2) if the plant does not have a lightning arrester, in protection zone C (Zone 2) if the plant has a lightning arrester, and are SPD in Test Class II as required by standards IEC1024, IEC1312-1, EN50083-1 in force (see figure 1 the following pages) Where and how to use them In accordance with current standards, series BY7 surge protection devices must be installed on incoming power lines to electrical distribution and control and command boards for automation, in order to guarantee immunity to the transistors of the equipment contained, such as PLC, industrial PCs, power supplies, inverters, etc.. For command and control boards, generally in Overvoltage Category II according to IEC EN 644-1 to be compliant with EMC standards, maximum impulsive overvoltage applied to equipment must be below 2.5kV, as indeed is also required by EN61000-4-4, 4-5. If SPDs with residual overvoltage of less than 2.5kV, which can be withstood by equipment, are not installed on command and control boards, overvoltage may cause plant or machine failure or breakdown, with costs that certainly exceed the cost of the SPDs. Installation of SDPs is also required, in any case, in order to comply with EMC standards and CE marking of the board. Performance They consist of a wiring socket that can be assembled onto a DIN rail and a removable protection module that contains the discharge, making it easy to disconnect the SPD during insulation tests or for quick replacement at the end of its working life. They are able to withstand ten 20kA impulses of Isc discharge current with impulse 8/20 and a single 40kA impulse, which is statistically very rare. As required by the product regulations on the SPDs, the BY7 series is equipped with an automatic thermal cut-off device able to disconnect the line transformer in the event of failure, providing an indication of the failure discharge visible on the front of the unit and via a clean contact. When, after numerous discharges and years of service the module has deteriorated, it can be rapidly replaced by removing it from its base socket and replacing it with another, identical one, without disconnecting the power supply. Fuses and protection devices BY7 series overvoltage dischargers have an incorporated device that disconnects the transformer at the end of its working life (close to short circuit or short circuited). They must, however, be fitted with protection against short circuit current upstream and differential protection against indirect contact (generally already included in the installation). If installed downstream of highly sensitive differential protection devices, we recommend using the configuration with gas discharger (see layouts on the following pages). The diagrams below illustrate an example protection connection according to priority type. AC Surge Protection Devices Protection takes priority Continuity of services takes priority 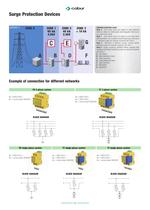 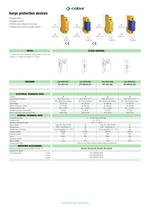 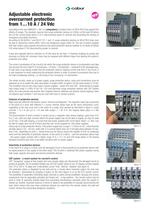 65 According to the new EN60204-1 Std. it is compulsory to protect wires on SELV-PELV lines against the effects of surges. The standard requires that surge protection devices on 24Vdc cut the fault off before the 24 Vdc control drops below 21.6 V, disconnecting power to controls and preventing the starting of emergency and safety functions. According to EN 60204-1 and EN 61131-1 and -2, surge protection devices on SELV-PELV lines must be able to disconnect shorts within 10ms and dangerous surges within 5s. The use of power supplies with high output surge capacity and precise and quick... 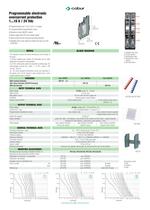 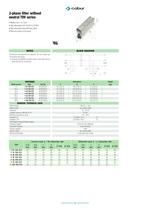 All Cabur catalogs and technical brochures