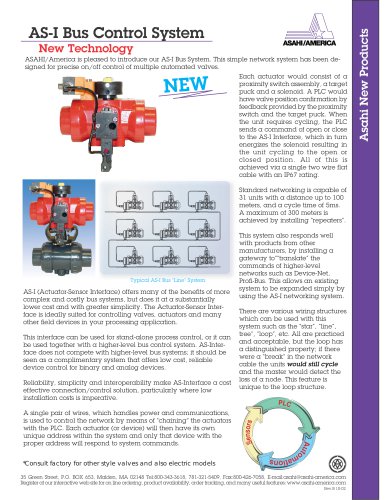 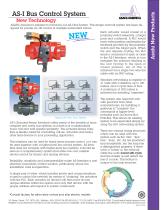 New Technology ASAHI/America is pleased to introduce our AS-I Bus System. This simple network system has been designed for precise on/off control of multiple automated valves. Each actuator would consist of a proximity switch assembly, a target puck and a solenoid. A PLC would have valve position confirmation by feedback provided by the proximity switch and the target puck. When the unit requires cycling, the PLC sends a command of open or close to the AS-I Interface, which in turn energizes the solenoid resulting in the unit cycling to the open or closed position. All of this is achieved via a single two wire flat cable with an IP67 rating. Standard networking is capable of 31 units with a distance up to 100 meters, and a cycle time of 5ms. A maximum of 300 meters is achieved by installing “repeaters”. This interface can be used for stand-alone process control, or it can be used together with a higher-level bus control system. AS-Interface does not compete with higher-level bus systems; it should be seen as a complimentary system that offers low cost, reliable device control for binary and analog devices. Reliability, simplicity and interoperability make AS-Interface a cost effective connection/control solution, particularly where low installation costs is imperative. *Consult factory for other style valves and also electric models A single pair of wires, which handles power and communications, is used to control the network by means of “chaining” the actuators with the PLC. Each actuator (or device) will then have its own unique address within the system and only that device with the proper address will respond to system commands. There are various wiring structures which can be used with this system such as the “star”, “line”, tree”, “loop”, etc. All are practiced and acceptable, but the loop has a distinguished property; if there were a “break” in the network cable the units would still cycle and the master would detect the loss of a node. This feature is unique to the loop structure. AS-I (Actuator-Sensor Interface) offers many of the benefits of more complex and costly bus systems, but does it at a substantially lower cost and with greater simplicity. The Actuator-Sensor Interface is ideally suited for controlling valves, actuators and many other field devices in your processing application. Typical AS-I Bus “Line” System This system also responds well with products from other manufacturers, by installing a gateway to”“translate” the commands of higher-level networks such as Device-Net, Profi-Bus. This allows an existing system to be expanded simply by using the AS-I networking system. 35 Green Street, P.O. BOX 653, Malden, MA 02148 Tel:800-343-3618, 781-321-5409, Fax:800-426-7058, E-mail:asahi@asahi-america.com Register at our interactive web site for on line ordering, product availability, order tracking, and many useful features: www.asahi-america.com Rev.B 10-02 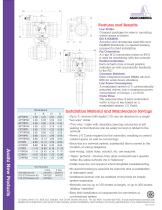 Features and Benefits Low Profile: Compact package for ease in mounting where space is limited ISO & NAMUR: Actuator and accessories meet ISO and NAMUR Standards; no special training required for field installation Pin Connection: A 5-pin M12 connection (rated at IP67) is used for interfacing with the network Position Indication: Each actuator has a visual position indicator as well as proximity feedback to the PLC Corrosion Resistant: Each component meets NEMA 4X and IP65 for wash down situations Low Power Consumption: A maximized system of 31 pneumatically actuated valves, has a maximum...

All Asahi/America catalogs and technical brochures