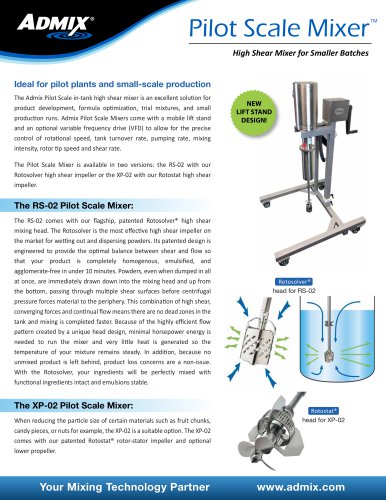 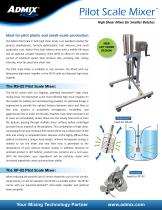 Pilot Scale Mixer High Shear Mixer for Smaller Batches Ideal for pilot plants and small-scale production The Admix Pilot Scale in-tank high shear mixer is an excellent solution for product development, formula optimization, trial mixtures, and small production runs. Admix Pilot Scale Mixers come with a mobile lift stand and an optional variable frequency drive (VFD) to allow for the precise control of rotational speed, tank turnover rate, pumping rate, mixing intensity, rotor tip speed and shear rate. NEW LIFT STAND DESIGN! The Pilot Scale Mixer is available in two versions: the RS-02 with our Rotosolver high shear impeller or the XP-02 with our Rotostat high shear impeller. The RS-02 Pilot Scale Mixer: The RS-02 comes with our ﬂagship, patented Rotosolver® high shear mixing head. The Rotosolver is the most eﬀective high shear impeller on the market for wetting out and dispersing powders. Its patented design is engineered to provide the optimal balance between shear and ﬂow so that your product is completely homogenous, emulsiﬁed, and agglomerate-free in under 10 minutes. Powders, even when dumped in all at once, are immediately drawn down into the mixing head and up from the bottom, passing through multiple shear surfaces before centrifugal pressure forces material to the periphery. This combination of high shear, converging forces and continual ﬂow means there are no dead zones in the tank and mixing is completed faster. Because of the highly eﬃcient ﬂow pattern created by a unique head design, minimal horsepower energy is needed to run the mixer and very little heat is generated so the temperature of your mixture remains steady. In addition, because no unmixed product is left behind, product loss concerns are a non-issue. With the Rotosolver, your ingredients will be perfectly mixed with functional ingredients intact and emulsions stable. The XP-02 Pilot Scale Mixer: When reducing the particle size of certain materials such as fruit chunks, candy pieces, or nuts for example, the XP-02 is a suitable option. The XP-02 comes with our patented Rotostat® rotor-stator impeller and optional lower propeller. Your Mixing Technology Partner 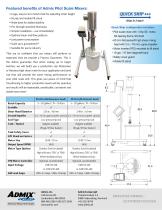 All Admix catalogs and technical brochures