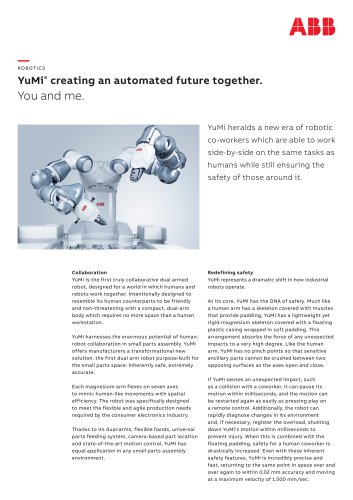 YuMi heralds a new era of robotic co-workers which are able to work side-by-side on the same tasks as humans while still ensuring the safety of those around it. Collaboration YuMi is the first truly collaborative dual armed robot, designed for a world in which humans and robots work together. Intentionally designed to resemble its human counterparts to be friendly and non-threatening with a compact, dual-arm body which requires no more space than a human workstation. YuMi harnesses the enormous potential of human-robot collaboration in small parts assembly. YuMi offers manufacturers a transformational new solution, the first dual arm robot purpose-built for the small parts space: inherently safe, extremely accurate. Each magnesium arm flexes on seven axes to mimic human-like movements with spatial efficiency. The robot was specifically designed to meet the flexible and agile production needs required by the consumer electronics industry. Thanks to its dual-arms, flexible hands, universal parts feeding system, camera-based part location and state-of-the-art motion control, YuMi has equal application in any small parts assembly environment. Redefining safety YuMi represents a dramatic shift in how industrial robots operate. At its core, YuMi has the DNA of safety. Much like a human arm has a skeleton covered with muscles that provide padding, YuMi has a lightweight yet rigid magnesium skeleton covered with a floating plastic casing wrapped in soft padding. This arrangement absorbs the force of any unexpected impacts to a very high degree. Like the human arm, YuMi has no pinch points so that sensitive ancillary parts cannot be crushed between two opposing surfaces as the axes open and close. If YuMi senses an unexpected impact, such as a collision with a coworker, it can pause its motion within milliseconds, and the motion can be restarted again as easily as pressing play on a remote control. Additionally, the robot can rapidly diagnose changes in its environment and, if necessary, register the overload, shutting down YuMi's motion within milliseconds to prevent injury. When this is combined with the floating padding, safety for a human coworker is drastically increased. Even with these inherent safety features, YuMi is incredibly precise and fast, returning to the same point in space over and over again to within 0.02 mm accuracy and moving at a maximum velocity of 1,500 mm/sec.

This revolutionary integration of speed, agility and sensory advantage ensures the safety of human coworkers on production lines and in fabricating cells. Innovative technology by design In addition to being a global leader in the manufacture of industrial robots, ABB Robotics also develops software and manufactures hardware, peripheral equipment, process equipment and modular manufacturing cells. This "total solution" concept is evident in YuMi's breakthrough design. While designed specifically for the electronics industry, YuMi is also well suited to other small parts environments,...

ABB Engineering (Shanghai) Ltd. No. 4528 Kangxin Highway Pudong New District 201319, Shanghai, China Phone: +86 21 6105 6666 We reserve the right to make technical changes or modify the contents of this document without prior notice. With regard to purchase orders, the agreed particulars shall prevail. ABB AG does not accept any responsibility whatsoever for potential errors or possible lack of information in this document. We reserve all rights in this document and in the subject matter and illustrations contained therein. Any reproduction, disclosure to third parties or utilization of its...