IRB 6700 The next generation of large industrial robots
4Pages 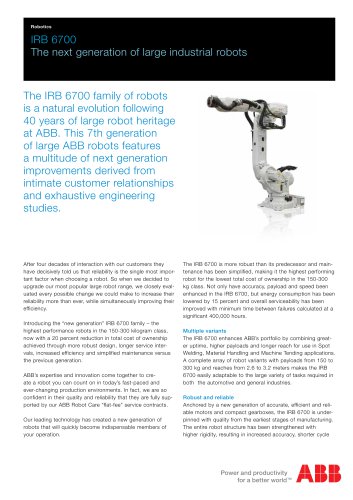 IRB 6700 The next generation of large industrial robots The IRB 6700 family of robots is a natural evolution following 40 years of large robot heritage at ABB. This 7th generation of large ABB robots features a multitude of next generation improvements derived from intimate customer relationships and exhaustive engineering studies. After four decades of interaction with our customers they have decisively told us that reliability is the single most important factor when choosing a robot. So when we decided to upgrade our most popular large robot range, we closely evaluated every possible change we could make to increase their reliability more than ever, while simultaneously improving their efficiency. Introducing the “new generation” IRB 6700 family – the highest performance robots in the 150-300 kilogram class, now with a 20 percent reduction in total cost of ownership achieved through more robust design, longer service intervals, increased efficiency and simplified maintenance versus the previous generation. ABB’s expertise and innovation come together to create a robot you can count on in today’s fast-paced and ever-changing production environments. In fact, we are so confident in their quality and reliability that they are fully supported by our ABB Robot Care “flat-fee” service contracts. Our leading technology has created a new generation of robots that will quickly become indispensable members of your operation. The IRB 6700 is more robust than its predecessor and maintenance has been simplified, making it the highest performing robot for the lowest total cost of ownership in the 150-300 kg class. Not only have accuracy, payload and speed been enhanced in the IRB 6700, but energy consumption has been lowered by 15 percent and overall serviceability has been improved with minimum time between failures calculated at a significant 400,000 hours. Multiple variants The IRB 6700 enhances ABB’s portfolio by combining greater uptime, higher payloads and longer reach for use in Spot Welding, Material Handling and Machine Tending applications. A complete array of robot variants with payloads from 150 to 300 kg and reaches from 2.6 to 3.2 meters makes the IRB 6700 easily adaptable to the large variety of tasks required in both the automotive and general industries. Robust and reliable Anchored by a new generation of accurate, efficient and reliable motors and compact gearboxes, the IRB 6700 is underpinned with quality from the earliest stages of manufacturing. The entire robot structure has been strengthened with higher rigidity, resulting in increased accuracy, shorter cycle

time and better protection. It has been built to withstand the harshest working environments and is available with ABB’s ultimate Foundry Plus 2 protection system. Specification Center Simplified maintenance In designing the new robot, easier serviceability was identified as a critical aspect for improving its total cost of ownership. The end result is a doubling of time between service intervals and an optimization of maintenance. On average it takes ABB technicians 20 minutes to conduct an annual inspection, and service and repair time has been reduced by as much as 15 percent. To ensure...