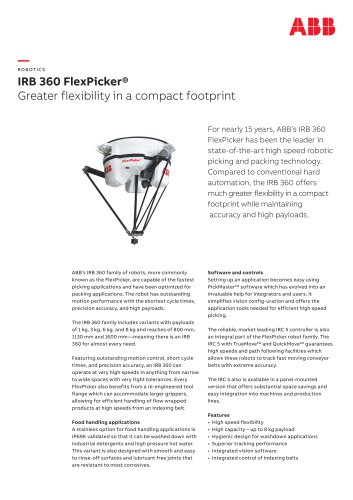 For nearly 15 years, ABB’s IRB 360 FlexPicker has been the leader in state-of-the-art high speed robotic picking and packing technology. Compared to conventional hard automation, the IRB 360 offers much greater flexibility in a compact footprint while maintaining accuracy and high payloads. ABB's IRB 360 family of robots, more commonly known as the FlexPicker, are capable of the fastest picking applications and have been optimized for packing applications. The robot has outstanding motion performance with the shortest cycle times, precision accuracy, and high payloads. The IRB 360 family includes variants with payloads of 1 kg, 3 kg, 6 kg, and 8 kg and reaches of 800 mm, 1130 mm and 1600 mm—meaning there is an IRB 360 for almost every need. Featuring outstanding motion control, short cycle times, and precision accuracy, an IRB 360 can operate at very high speeds in anything from narrow to wide spaces with very tight tolerances. Every FlexPicker also benefits from a re-engineered tool flange which can accommodate larger grippers, allowing for efficient handling of flow wrapped products at high speeds from an indexing belt. Food handling applications A stainless option for food handling applications is IP69K validated so that it can be washed down with industrial detergents and high pressure hot water. This variant is also designed with smooth and easy to rinse-off surfaces and lubricant free joints that are resistant to most corrosives. Software and controls Setting up an application becomes easy using PickMaster™ software which has evolved into an invaluable help for integrators and users. It simplifies vision config-uration and offers the application tools needed for efficient high speed picking. The reliable, market leading IRC 5 controller is also an integral part of the FlexPicker robot family. The IRC 5 with TrueMove™ and QuickMove™ guarantees high speeds and path following facilities which allows these robots to track fast moving conveyor belts with extreme accuracy. The IRC 5 also is available in a panel-mounted version that offers substantial space savings and easy integration into machines and production lines. Features • High speed flexibility • High capacity - up to 8 kg payload • Hygienic design for washdown applications • Superior tracking performance • Integrated vision software • Integrated control of indexing belts