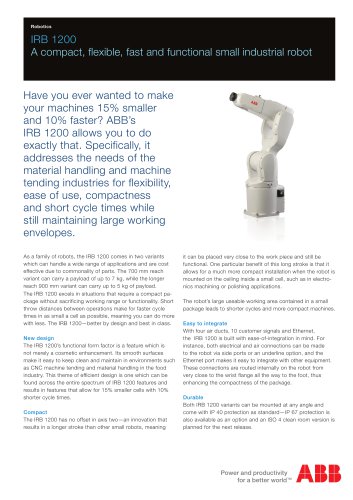 IRB 1200 A compact, exible, fast and functional small industrial robot Have you ever wanted to make your machines 15% smaller and 10% faster? ABB’s IRB 1200 allows you to do exactly that. Specifically, it addresses the needs of the material handling and machine tending industries for flexibility, ease of use, compactness and short cycle times while still maintaining large working envelopes. As a family of robots, the IRB 1200 comes in two variants which can handle a wide range of applications and are cost effective due to commonality of parts. The 700 mm reach variant can carry a payload of up to 7 kg, while the longer reach 900 mm variant can carry up to 5 kg of payload. The IRB 1200 excels in situations that require a compact package without sacrificing working range or functionality. Short throw distances between operations make for faster cycle times in as small a cell as possible, meaning you can do more with less. The IRB 1200—better by design and best in class. New design The IRB 1200’s functional form factor is a feature which is not merely a cosmetic enhancement. Its smooth surfaces make it easy to keep clean and maintain in environments such as CNC machine tending and material handling in the food industry. This theme of efficient design is one which can be found across the entire spectrum of IRB 1200 features and results in features that allow for 15% smaller cells with 10% shorter cycle times. Compact The IRB 1200 has no offset in axis two—an innovation that results in a longer stroke than other small robots, meaning it can be placed very close to the work piece and still be functional. One particular benefit of this long stroke is that it allows for a much more compact installation when the robot is mounted on the ceiling inside a small cell, such as in electronics machining or polishing applications. The robot’s large useable working area contained in a small package leads to shorter cycles and more compact machines. Easy to integrate With four air ducts, 10 customer signals and Ethernet, the IRB 1200 is built with ease-of-integration in mind. For instance, both electrical and air connections can be made to the robot via side ports or an underline option, and the Ethernet port makes it easy to integrate with other equipment. These connections are routed internally on the robot from very close to the wrist flange all the way to the foot, thus enhancing the compactness of the package. Durable Both IRB 1200 variants can be mounted at any angle and come with IP 40 protection as standard—IP 67 protection is also available as an option and an ISO 4 clean room version is planned for the next release.

For more information please contact: * No. 5, Lance 369, Chuangye Road ^ We reserve the right to make technical changes or modify the contents of this document without prior notice. With regard to purchase orders, the agreed particulars shall prevail. ABB does not accept any responsibility whatsoever for potential errors or possible lack of informa- tion in this document. We reserve all rights in this document and in the subject matter and illustrations containec therein. Any reproduction, disclosure to third parties or utilization of its contents - in whole or n parts - is forbidden...